Colin Firth made a dramatic entry in the awards picture last year when Tom Ford’s “A Single Man” screened at the Venice and Toronto Film Festivals. He won unanimous raves for his role as a college professor in the early 1960s who tries to hide his devastation after his partner of two decades is killed in an auto accident.

A stylish, lovely meditation on love, loss and acceptance, the film turned the fashion designer into a serious writer-director, and Firth into an immediate Oscar contender.

The actor is a Best Actor nominee, his first nomination in a 25-year career that has found him appearing in everything from the BBC miniseries “Pride and Prejudice” to films like “Shakespeare in Love,” “Bridget Jones’s Diary”and “Mamma Mia!” 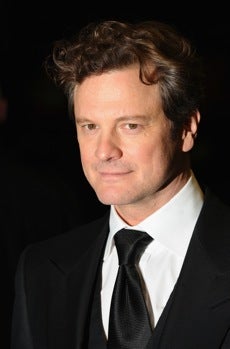 Been traveling a lot lately?
It’s been crazy, really. I come out of the rabbit hole, blinking in the daylight. It’s kind of a culture shock, going from your day job into this sort of thing so rapidly.

I remember Renee Zellweger doing this when we were making “Bridget Jones’s Diary.”  She would go to L.A. for the weekend to do press, and I said, “That’s insane. You cannot possibly do that.” And now that’s precisely what I’ve been doing. Which is not a complaint.

If you make an awards movie for Harvey Weinstein, you work.
Yes, you do. Although I’ve never had a single call from Harvey saying, “You must do this” or “you have to do that.”

You’re obliged to do it for one of two reasons, really. One is that you got paid, and this is why they pay you. They don’t pay you to do the acting, you do that because you like it. You get paid because they think you’ll be worth something when it comes time to talk about it.

Or the other reason is that you didn’t get paid, in which case it’s a tiny little movie which needs you to do it. And you probably worked in a fairly intimate atmosphere, where you’re very close to the people who need your support. Which is the case with this.

Despite the enormity of Tom’s fame, this is small stuff. We shot in 21 days, had no budget, and it’s entirely dependent on people’s response and word-of-mouth. That’s the only currency it has, really.

But if you put those things together, and you look at a man who’s written a script that I think is pretty compelling and beautiful, and has the passion that he had and can speak so eloquently about it, and has chosen the actors that he’s chosen … I know that I’m talking about me – and quite frankly, vanity has no small part to play in this.

He says, “There’s only one person in the world to play this, I’m going to put this whole movie on your shoulders, it has to be you.” So there really is a “flattery will get you everywhere” component to this.

When you read it did you think, I know how to play that guy?
No. Because George wasn’t drawn in detailed strokes in that way. It was a very internal piece of writing, in a way. Reading the script gave me more of a sense of how George sees the world than it did a portrait of George.

There’s a disconnect in the film. The George we see onscreen is always wearing a mask of sorts when he deals with other people, or even when he’s getting ready for the day.
You’re right. And the whole film is defined by that mask. George dresses the way he does as a kind of body armor. It’s the way he protects himself from everything. It’s not vanity, it’s a sign of neurosis, a sign of desperation.

What’s inside is hysterical misery and chaos. He doesn’t want he world to see it, and he doesn’t want to fall apart and lose control completely. I think his fear is that he will completely break down, and that if he doesn’t brush his shoes and his hair and his fingernails and clip his tie-pin on, he’ll curl up in the fetal position and be under a bed somewhere shaking.

The other side of the disconnect, though, is that the voiceovers are the one part of the film where we do hear him being …
Very personal.

And honest.
Those are moments of real confiding. And the conceit there is a rather mysterious one, because it’s kind of a dead man talking. Or a man in the moment of his death, perhaps. I suppose in a way he’s in that place that he describes in the last voiceover, which I think is so beautiful, when he talks about those moments when everything seems so fresh, exactly as it’s meant to be.

That would probably sound too perfectly resolved if it weren’t for the fact that he says, “I know I can never hang onto these moments.”

Tom put many very personal details from his own life into the script. Did his degree of personal connection to the events ever feel limiting, as if he wanted you to do things the way he remembered them?
Quite the reverse. Any good collaborator recognizes that the interpreter has to own it. Tom had been inspired by Isherwood, but then he had to leave that behind and bring his own thing.

But Tom wrote this, and then basically said, “Now it’s all over to you.” This is how he dresses, this is what he says, this is where he goes, this is his house, this is his office. The rest is you, and yours. He interprets the writer, and I have to interpret what he gives to me. And if he’s going to suffocate me with “No, that’s not how I remember it,” you might get something out of me, but you won’t get my best.

And it clearly was very personal, but it’s not the first time I’ve worked with a writer for whom it’s deeply personal. I mean, I was directed by Harold Pinter in one of his own plays, and he never gave anything away about what he was thinking when he wrote it. He just said, “Say it a bit slower … a bit faster … sit down.” And those were always brilliant notes.

There’s one scene in particular, when George gets the news that his partner has been killed, and the camera just stays on your face long after you’ve hung up the phone. It’s all on you to show what’s going on.
Again, there were no instructions from Tom. He didn’t say, “I want it to be like this, play it like that, I want you to be very contained … ” Nothing like that. The script gave me a lot of information. George is being very polite, and he’s as polite when he puts the phone down as he was when he picked it up. Now, that tells me something already.

If the dialogue towards the end of that scene was, “I’m sorry, Mr. Ackerly, I have to go, I’m having trouble breathing,” you know he’d be going in a different direction. But that’s not what he says. He says, “There were two dogs. May I ask you what happened to the dogs? … I see. Well, thank you for calling, Mr. Ackerly.” He’s an absolute picture of courtesy, and the script didn’t tell me any more than that.

It’s one of those things, your heart sinks slightly when you read it, because one of the hardest things in acting is to start a scene in one condition and end it in a different one, in front of a rolling camera. We actors love getting our stuff together before the camera starts rolling. “Okay, hysterical desperation. Give me some quiet for a few minutes, let me get my hysterical desperation, got it, roll camera.” But to start happy and find it as the scene goes on is a challenge. And then to do another take and go back to happy so you can do the journey again …

What I think worked here, if it did work, was Tom’s patience, and ability to let things unfold at their right pace. I didn’t think the tears were going to happen, I wasn’t set up for that. But the fact that Tom allowed enough time to see that numbness thaw out, and progress into something else, was why I had the opportunity to go a little further.

He could have said cut when the phone got put down.I nstead, he let the entire magazine roll out. I remember it being like 11 minutes or something. He just did not say cut for an eternity, so I got to the chance to do the whole journey.

As you were going through the journey, were you thinking in the back of your mind, why isn’t he calling cut?
Yeah, I was. But actually, once a minute’s gone by and he hasn’t said cut, you stop looking out for it. You think, okay, we’re just here, now. Staninslavsky talks about what he called the third eye, this piece of consciousness that’s always there despite your immersion in a role. He said it has to be there. That’s the craft. Otherwise you’re just psychotic.

So what was tougher, doing that scene or swimming naked in a fish tank?
Different kinds of tough. I mean, there wasn’t much acting required in the fish tank. It was just the combination of not be able to breathe, along with the general humiliation which so often accompanies my work.

This is your first experience with the Academy Awards, but you’ve been nominated for the BAFTA Awards before. Is that less of a circus?
You mean in the sense of campaigning for these things?

Yeah.
I don’t think there’s any sense of campaigning for BAFTA. I know I haven’t. I’ve been up for one a few times now, and I’ve never done a stroke of work for it. But I’ve also never won one, so, I don’t know.

Maybe somebody else has done something, and that’s why I’ve never won.