HBO’s “Grey Gardens” and the Weinstein Co.’s “A Single Man” were among winners of the Dorian Awards announced Wednesday. The inaugural awards, honoring the year’s best in film and TV, are presented by the Gay & Lesbian Entertainment Critics Association, comprised of film and television journalists and historians. 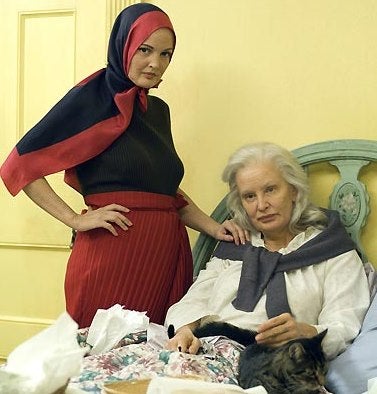 “Single Man” was named Film of the Year, beating “Precious: Based on the Novel ‘Push’ by Sapphire,” “Up,” “Bright Star” and “(500) Days of Summer.” And the film’s star, Colin Firth, won the Film Performance of the Year award.
“Grey Gardens” was named TV Drama of the Year, and star Drew Barrymore was honored with the TV Performance of the Year: Drama trophy.
On the comedy side, the winner was Fox’s “Glee,” named TV Musical or Comedy of the Year, with the show’s Jane Lynch taking the TV Performance of the Year: Musical or Comedy award for her turn as hypercompetitive cheerleading coach Sue Sylvester.
The Dorian Awards have a few categories not found at most awards ceremonies, including Campy Film of the Year, which went to “Obsessed,” and Campy TV Show of the Year, won by “Glee” (which beat out “The Colbert Report,” “Grey Gardens,” “Jersey Shore” and “The Real Housewives of New Jersey.”)
“Precious” star Gabourey Sidibe received the “More, Please!” Breakout Star of the Year award, beating Anna Kendrick, Jeremy Renner, Alexander Skarsgard and Ed Helms.
MSNBC’s Rachel Maddow took home the Savage Wit of the Year award, beating more established snarksters including Jon Stewart and Stephen Colbert and their respective writing staffs, as well as Tina Fey and the writers of “30 Rock” and documentarian Kirby Dick.
Lifetime Television’s “Prayers for Bobby,” starring Sigourney Weaver as the mother of a gay teenager who kills himself, and “A Single Man” were honored as the year’s best LGBT-themed TV show and movie, respectively.
The group also handed out two awards in the category Forever Ageless. On the film or TV side, the award went to Joseph L. Mankiewicz’s showbiz satire “All About Eve.” The Forever Ageless performer went to Cloris Leachman, whose 60-year career spans “Studio One” to “Dancing With the Stars,” and “The Last Picture Show” to “Young Frankenstein.”
The Gay & Lesbian Entertainment Critics Association’s approximately 30 members include some of America’s noted film, television and culture critics for print, online and broadcast.
GLECA members nominate movies and TV programs on the basis of their overall quality, depth and entertainment value.
The group was formed in 2009.