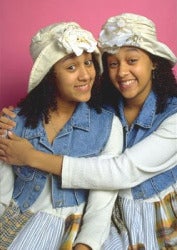 For now, "Tia and Tamera Take 2" is just a one-time special, but Style says it will consider making it a regular series if the show does well.

Tia and Tamera Mowry are best known for starring on the family comedy series "Sister, Sister," which ran from 1994-99. Since then, they have regularly landed ensemble roles and guest spots on primetime, but they haven't teamed up for another series.

Style's special will follow the twin's real lives, which according to Style's announcement, include everything "from a disastrous blind-date, to a fear-tinged flying lesson to a visit to a Los Angeles tattoo parlor."