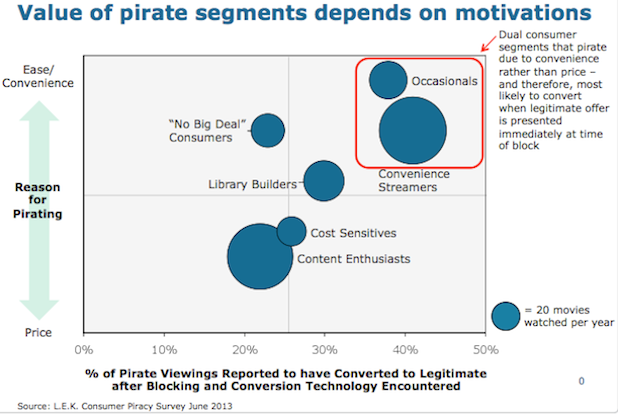 Verance, a technology company that works with studios to prevent content theft, has identified six types of pirates, and suggested ways Hollywood can thwart their illicit activity.

Verance determined the types based on a consumer survey intended to figure out why so many people watch pirated copies of movies and TV shows. The types range from No Big Deals to Library Builders, with the former the biggest category.

So what is Hollywood to do? Verance recommends that it make legitimate copies of movies easier to find and cheaper. People do not want to pay $10-15 to buy a movie using iTunes or Hollywood’s own clunky service when they can find it online for nothing (or close to it).

Convenience trumps cost, according to Verance, and that is one area in which the company argues its “curtailment and conversion technologies” can help.

The report’s central argument, that Hollywood can deter people from pirating movies and TV shows, is important to an industry that acknowledges it has lost the public relations battle. Most people believe piracy is acceptable, and stream or download copies of movies they want to see.

“This is addressing the idea that people who engage in pirate behavior may never be dissuaded,” Joe Winograd, CTO of Verance, told TheWrap. “One of the arguments made by critics of studios is that these are people who wouldn’t be customer anyways. What we see is piracy is a much more multi-faceted activity.”

Occasionals (29 percent) – People who prefer to watch legitimate copies of movies but will watch pirated copies when given the opportunity.

No Big Deals (36 percent) – People who see no harm in pirating movies.

Content Enthusiasts (10 percent) – People who love movies but don’t have enough money to pay to for all the movies they want to see.

Cost Sensitives (11 percent) – People who like movies but don’t have enough money to pay for movies.

Library Builders (six percent) – People who want as many movies as they can, regardless of its origin.

The biggest challenge? No Big Deals, the biggest group, is also the hardest to persuade.