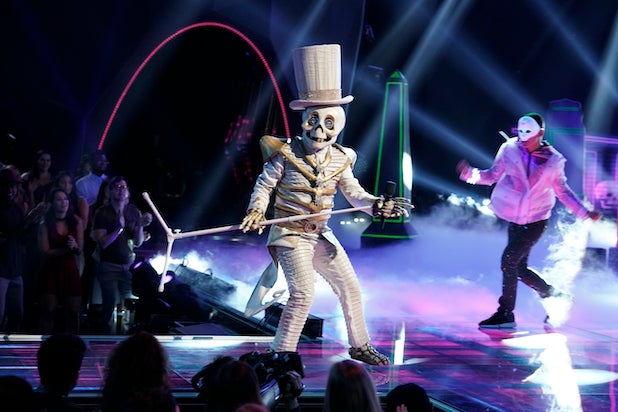 The identity of the dapper Skeleton on Fox’s “The Masked Singer” was revealed Wednesday night — and no, it wasn’t Martin Short, who was by far the leading guess by both the panelists and viewers offering up their thoughts on social media for the last few weeks.

Turns out the tuxedo-clad bone man was actually Paul Shaffer. And while you were guessing Skeleton was Short, Shaffer tells TheWrap Short, his best friend, was bugging him to find out if Shaffer was the Skeleton.

“All I can say is that Marty called me and he said, ‘Are you the Skeleton?’ And I said, ‘I thought you were the Skeleton.’ ‘Cause you gotta say something to people,” the Canadian musician said. “A lot of people started asking, are you the Skeleton? But of course I wasn’t going to tell anybody, not even my best friend Marty.”

But the incorrect guess of Short, which was first raised by panelist Ken Jeong on the two-hour Season 2 premiere last month, still makes some sense to Shaffer.

“No. 1, he and I are best friends, so I could see that a little of him certainly has rubbed off on me over the years, that’s No. 1,” he said. “No. 2, I thought it was hilarious that Ken Jeong, when he was speaking to me as the Skeleton that first night, he said, ‘I’ve studied Martin Short all my life. This man, his comedy is such an influence. I’m sure it’s Martin Short.’ That was hilarious to me.”

Also Read: 'The Masked Singer' Reveals Another Celebrity Contestant: And The Eagle Is... (Video)

Short wasn’t the only close friend Shaffer had to keep the secret from, as he says he disclosed his participation in the singing competition to only family members, who had to sign NDAs. That meant his longtime friend and former boss, David Letterman, was in the dark. But Shaffer says he had a hunch.

“He is not one of the people that knew, no,” Shaffer, who served as Letterman’s musical director, band leader and sidekick on the entire run of both “Late Night with David Letterman” (1982-1993) and “Late Show with David Letterman” (1993-2015). “But he did call me up, too — and he knows that people have to sign things, confidentiality things sometimes, for things like this — so he said, ‘You don’t have to say anything, but I know that you’re The Skeleton.’ He said, ‘I know how you walk.’ He recognized my walk, that’s how he knew it was me. But I didn’t say anything! I could neither confirm nor deny.”

Shaffer performed Jet’s “Are You Gonna Be My Girl” on tonight’s episode and previously sang The Sugar Hill Gang’s “Rapper’s Delight” and Otis Redding’s “Hard to Handle.” If he stayed on, he was hoping to do “(I Can’t Get No) Satisfaction” by the Rolling Stones, which is seldom performed by anyone but them, but Shaffer says Fox got the rights to use.

Of the entire “Masked Singer” experience, Shaffer says “it was like a day at the greatest amusement park I could think of with the funnest ride that you stood in line for all day long.”

“That’s really what it was like to me,” he continued. “Each thing was more hilarious than the last.”