If soon-to-be honorary Oscar winner Roger Corman were allowed to design his own golden statue, it might look like one of these guys. 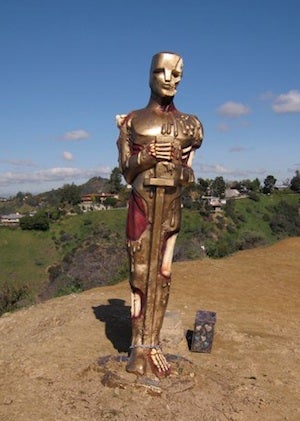 A pair of mysterious "skeleton-Oscar" statues showed up in two famed Los Angeles locations on Thursday morning: One at the highest peak of Runyon Canyon, near the Hollywood sign, and another in the parking lot of Mel’s Drive-In diner, near the corner of Hollywood and Highland — where the Oscars are held.
"Beauty is one snip away," read a plaque near the Hollywood-sign version.
"Beauty is skin deep," said the one near Mel’s.
So where did these ghoulish idols come from — and what are they supposed to mean?
(Click here for a slideshow of images)
They are the work of a U.K.-based artist who goes by D*Face, said a person with connections to the artist, who didn’t want to be identified for fear of getting in trouble.
The 6- to 7-foot figures, made of a painted resin, were crafted in the United Kingdom and shipped here, the person said.
Aside from the inscriptions, there was no agenda or special meaning behind them, TheWrap was told — and there was certainly no malicious intent, either.
The statue up on 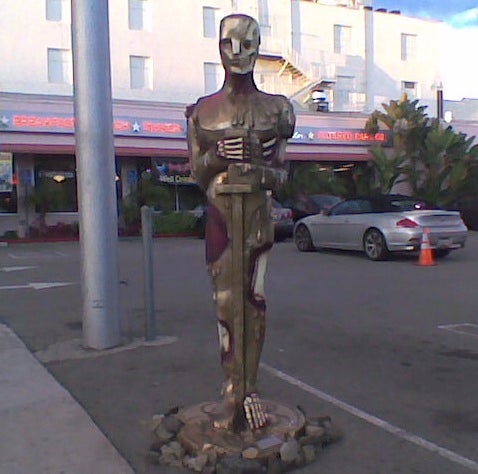 Runyon Canyon’s hardest-to-reach peak had been chained to a stake in the ground was still there as of late Friday morning. It was still attracting a lot of attention from hikers who made the challenging trek to the top.
The one at Mel’s diner still stood, too,  after the sun went down over Los Angeles on Thursday.
Additional reporting (and photo, right) by Pamela Chelin.
x
Looks like you're enjoying reading