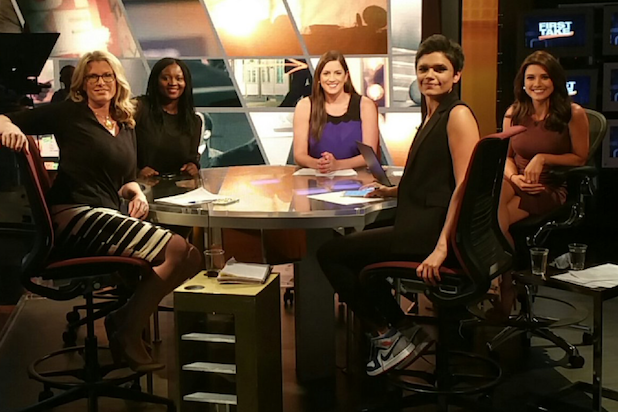 When Skip Bayless left ESPN’s “First Take” for a gig at Fox Sports, the talk of the sports media world was who would take over his seat next to Stephen A. Smith. While no decision has been announced yet, and Smith is on vacation this week, ESPN had an all-female panel filling in on Wednesday’s edition of the shoutfest.

And that (albeit temporary) move, has sparked an onslaught of sexist remarks on social media.

Comments on Twitter range from comparisons to “The View” to photos of a “First Take” hat in a trash can.

When TheWrap asked ESPN about the backlash, vice president of production Marcia Keegan reminded that “there were a lot of positive comments. … Unfortunately, it’s something all women in the public eye go through.”

And viewers should get used to the female cast, at least for the remainder of the week.

Keegan explained how the all-female panel came about.

“We were looking for substitutes and, you know Sarah and Kate, Anita Marks and Jane, on occasion, fill in. The names were all there, and there was talk about Kate and Sarah, and then I said, ‘We should add Jane and just do the trifecta,'” Keegan said.

“It was very natural and organic. There was no stunt aspect to it.”

Check out some of the most egregious tweets below.

Cant beleve First Take would spit in the face of men on #HeterosexualPrideDay by making us watch a all females panel pic.twitter.com/5TSVV5jdMi

ESPN giving different people a chance to be on First Take is cool and all, but this lineup is not it.

All female First Take and they talking about the ????????

@FirstTake worst panel ever they belong in the kitchen.

4 women on @FirstTake who know nothing about sports. Please never do this again @espn

Y'all done fucked around an ruined first take smh. https://t.co/wQUUHF9sft

@FirstTake I hope your ratings drop like a stone. Your a joke now even more so with a bunch of jabbering females calling The Flash a puppy

“Max Kellerman’s leaving [‘SportsNation’] … he’s gonna be on ‘First Take,'” Cowherd said in comments that were broadcast on Periscope.

Skip Bayless' time as ESPN's most controversial pundit is almost at an end, and the network is searching for someone to replace him on "First Take." Many ESPN personalities have been bandied about as a potential replacement, with some more likely to take up the job than others.