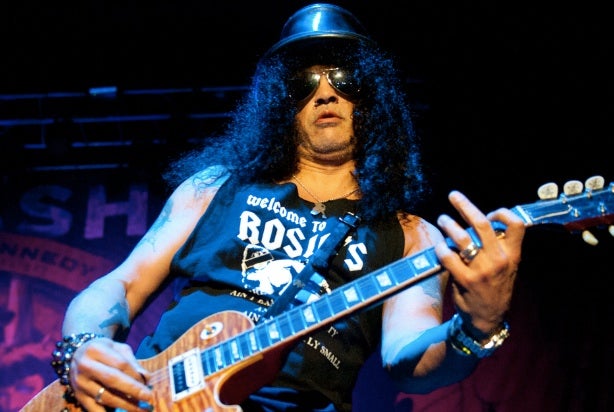 With a name like Slash, it’s no surprise that the former Guns N’ Roses guitarist is a fan of Freddy, Jason and things that go bump in the night.

The Rock & Roll Hall of Famer is partnering with Fandango on a new micro-site, “House of Screams.” The site will be devoted to breaking down the scariest moments in horror movie history and to selling tickets to upcoming films in the genre.

Also read: Let’s Get Scared: Why Horror Movies Are Immune to the Digital Onslaught (Video)

In addition, Slash will co-host a special video mini-series, “Slash‘s Screamings” with Fandango correspondent Tiffany Smith that looks at new horror films like the remake of “Carrie” and the thriller “All the Boys Love Mandy Lane.” It will also offer an extended preview of “Nothing Left to Fear,” which the guitarist is backing through his production company Slasher Films. The film stars Anne Heche and features original music produced by Slash.

Fandango previously launched content hubs devoted to family and action movies. The company has bulked up its original video content over the past year, nabbing Dave Karger from Entertainment Weekly to serve as its chief correspondent and launching shows around upcoming movies and behind-the-scenes talent.

As part of the focus on horror, Smith will also host a mini-series entitled “Behind the Screams” which looks at the special effects and back stage secrets behind famous Universal Studios monster movies. Universal, like Fandango, is owned by Comcast.

To help kick off “House of Screams,” Fandango is launching the “Fear Face-Off: 13 Days of Psychos” Facebook application, which pits “Psycho’s” Norman Bates against the likes of Freddy, Jason, Leatherface, and other cinematic mass-murderers to see who wins.