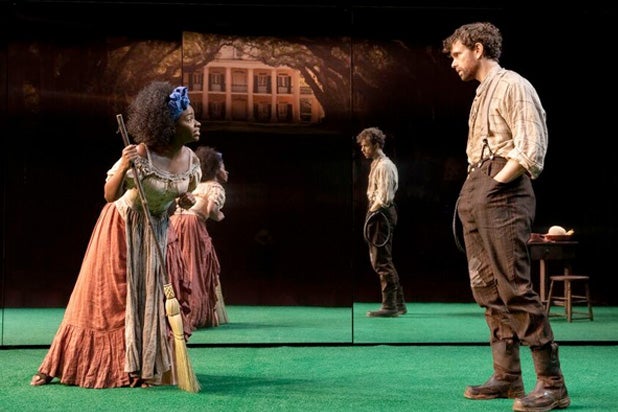 Jeremy O. Harris’ “Slave Play,” which opened Sunday at Off Broadway’s New York Theatre Workshop, is a giant trigger warning in three acts. This is an ambitious, at times uneven satire about race and sex and power and politics that seems designed to provoke.

But since we first meet Keneisha twerking to Rihanna’s “Work” and Phillip picks out an R. Kelly tune on his fiddle, things are not quite what they seem. Indeed, Harris — a student at Yale Drama School who has two shows opening Off Broadway this season — has a very big twist up his sleeve. (No spoilers here.)

Harris’ intentions become clearer in the middle section of his three-act, intermissionless play, with the introduction of two modern-day academics-cum-therapists (Chalia La Tour and Irene Sofia Lucio) who use terms like “heteropatriarchal” and “positionality” in an attempt to help people to “process” their feelings.

That processing does not seem to go well for anyone, including the well-intentioned therapists themselves who seek to impose in-vogue theory on the messy reality of American race relations. Nor does it bolster the white (or paler) people, who seem surprised to get no credit for good intentions.

“You’re the virus,” one character tells them at one point, recalling the decimation of indigenous peoples by the arrival of Europeans to the American continent. “Your mere presence was biological warfare.”

“Slave Play” can be saggy; each of the three acts would benefit from some trimming. And the third act, which reunites one of the couples in an encounter that is both intimate and humiliatingly raw, seems more designed to shock than illuminate.

At no point do we believe that these are flesh-and-blood humans who might have chosen to be together in a relationship; they seem more like props — or in this case, agitprops — for Harris’ provocative message about the dreadful state of race relations, which seems to have hobbled everyone, white and black.

In Harris’ view, patterns of oppression have become so ingrained that even African Americans fail to recognize its footprints — even when they are clearly marked on their backs. “Slave Play”  recalls the work of Thomas Bradley and Robert O’Hara (who directs this production, sometimes too broadly) and it announces the arrival of a bold and challenging new voice in theater.