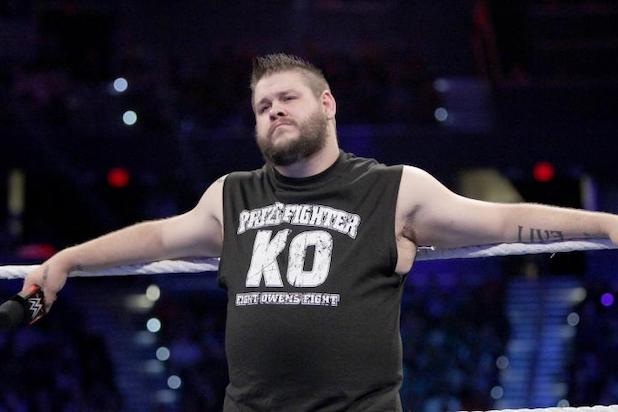 “SmackDown Live” Superstar Kevin Owens will “Fight Anyone,” according to his WWE merch. At the upcoming pay-per-view “Money in the Bank,” he’ll battle WWE Champion Kofi Kingston, whom Owens turned on rather quickly after a short-lived alliance.

Once again a heel (the pro-wrestling term for a bad guy), K.O. tells TheWrap that wearing the white hat — and at times, a New Day unicorn antler — was probably a bit too short-lived for his liking.

“I wish I would have been able to stay on the other side of the fence a little longer, to be honest,” Owens told us ahead of Tuesday’s “SmackDown” episode. “I don’t think anybody’s really seen me as a babyface ever, or, like, the way that I envision myself being. I don’t think people have any idea what I can do on the other side. But, you know, what’s done is done.”

But: “I ended up being wrong because once I did it, I knew that was the right time and place,” Owens (real name Kevin Steen) said.

We all knew his character would eventually turn on Kingston and the new champ’s clean-as-a-whistle tag team, but as Owens put it to us, “I doubt that they saw it coming that night.”

And then he put it in terms that readers of a Hollywood trade magazine could understand — whether or not they’re also fans of the squared-circle’s sweet science.

“You know the movie ‘The Village’? The M. Night Shyamalan movie? I watched that movie and the ending blew me away,” Owens said. “And afterwards, I had so many people tell me, ‘Oh, I saw it coming, I called it.’ You’re full of it, there’s no way you called that. It’s the same thing here. You knew there was gonna be some sort of swerve but there’s no way– I really don’t think people expected it to be that quick.”

We won’t spoil the film’s twist for you, but Owens’ point is that the quick heel-turn was “very effective” for the storyline.

Also Read: WWE's Chris Jericho Tells Us Where He Keeps 'The List' and What He Was Actually Writing on It

“What really made it more effective is how much people like Kofi,” he added.

Indeed. And now the two are fast-tracked for a title match at the May 19 PPV. That works too.

Readers can watch Owens respond to Kingston’s last-week attack tonight on “SmackDown Live,” which starts at 8/7c on USA Network. “Money in the Bank” will stream live on SVOD service WWE Network.