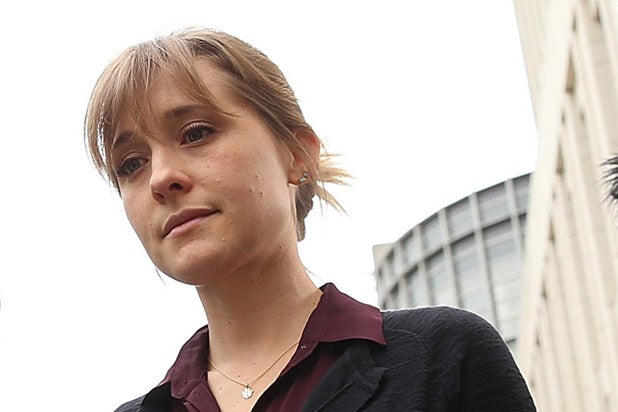 Allison Mack, the former “Smallville” star arrested last month on sex trafficking charges for her role as a leader of the NXIVM organization that authorities have called a “sex cult,” said that she came up with the idea of physically branding the women in the group.

“I was like: ‘Y’all, a tattoo? People get drunk and tattooed on their ankle ‘BFF,’ or a tramp stamp,” Mack told the New York Times Magazine in a story published late Wednesday. “I have two tattoos and they mean nothing.'”

Times writer Vanessa Grigoriadis also reported that not all of the women who received the cauterized brand were told that the symbol contained the initials of both NXIVM founder Keith Raniere and Mack herself.

Also Read: Allison Mack Out on Bail In NXIVM Case, Under House Arrest

Mack, who is free on $5 million bail until a trial scheduled for October, said in the interviews — conducted months before her arrest — that the group used painful practices as a motivational technique.

“I found my spine, and I just kept solidifying my spine every time I would do something hard,” Mack said.

She said NXIVM focused on “women coming together and pledging to one another a full-time commitment to become our most powerful and embodied selves by pushing on our greatest fears, by exposing our greatest vulnerabilities, by knowing that we would stand with each other no matter what, by holding our word, by overcoming pain.”

U.S. Attorney Richard P. Donoghue has accused Mack of recruiting women into the organization, and of “directly or implicitly” requiring these women to have sex with NXIVM founder Keith Raniere.

Mack has pleaded not guilty to sex trafficking, and if convicted, she faces 15 years to life in prison.

In March, Raniere was arrested in Mexico, where he fled after the publication last fall of a New York Times report about NXIVM practices like branding women. Federal authorities say Raniere and Mack created a secret society within NXIVM in 2015 called “DOS,” which “operated with levels of women ‘slaves’ headed by ‘masters,'” and that some of the DOS slaves became masters who “directly or implicitly required the slaves to have sex with Raniere.”