Lydia R. Diamond’s characters are walking on egg shells in her new play, “Smart People,” which opened Thursday at Second Stage’s Tony Kiser Theatre Off Broadway. As it turns out, these people don’t want to leave any shell uncracked, if not smashed to smithereens.

“Smart People” is about racism in the way that Jules Feiffer’s screenplay for “Carnal Knowledge” is about sexism. Nothing else is open for discussion. It’s why all those eggshells keep getting broken. There’s no talking about one subject when a character is thinking something else. In other words, where’s the subtext? If a character makes a remark that can be construed as racist in any way, he or she is called out on it. Immediately. “Confrontational People” would be a more apt title.

Not all the racism is interracial. Jackson (Mahershala Ali) and Valerie (Tessa Thompson) are an African-American couple. When they finish eating a meal, he comments on her choice of condiments. She takes offense. She thinks he’s being superior. They talk about it. Rather, they argue about it. Later, he accuses her of sleeping with him on their first date because he’s a doctor. They fight about it.

Joshua Jackson and Tessa Thompson are very attractive performers. They manage to bring a relative cool to their portrayals even when they’re arguing. Playing the more alpha characters, Ali and Son come off as strident.

Arguments are fine. Many fine plays have been built around them, but the quick repetition of them over the course of two and a half hours becomes numbing. In the first act, there are several vignettes, each of which carries the same weight under Kenny Leon‘s direction. Then again, Diamond’s writing never leaves one insult or slight to simmer and then explode three or four scenes later. 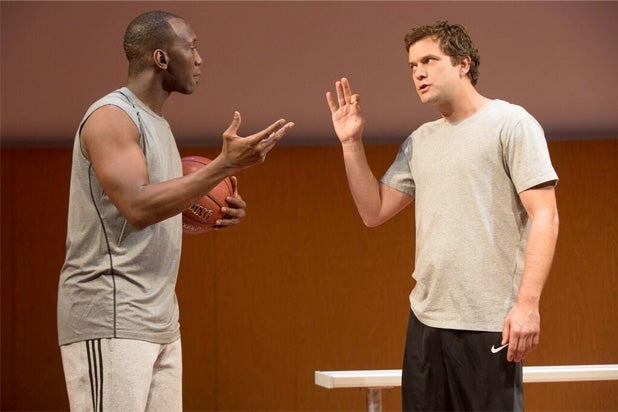 The one major development in the play is Brian’s research. He believes white people are hard-wired to be racist. In the first act, that research isn’t discussed much. We learn more in the second act: The subject of Brian’s study is not people in general, it’s “white people,” even though he interviews and tests (complete with a headdress of electrodes) people from a number of ethnic groups. Joshua Jackson wisely chooses to go slightly mad the more he talks about his research. It’s one of the more intriguing aspects of “Smart People.” Is he nuts or is he right?

In Diamond’s play, the woman would explode, the man would defend his comment, they’d have a big fight, argue it out, and then go home pissed. Fade out to next scene. At the dinner party I attended, the woman replied that she didn’t watch the Atlanta TV show because she’d never been to that city, whereas she’d lived in New York and Beverly Hills. From there the conversation moved on to even less controversial subjects than Bravo TV. But, of course, the dinner party never quite recovered.

The characters in “Smart People” aren’t so smart. They almost never keep the lid on.

Diamond means to say big things. She sets her play against the background of Barack Obama’s run for the presidency, beginning in fall 2007 and ending at his inauguration, which is projected over scenic designer Riccardo Hernandez’s vast cyclorama. Big ideas have a way of getting lost when people bicker.