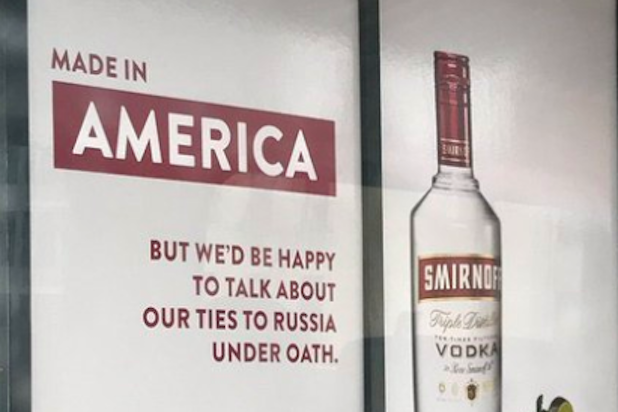 Smirnoff Vodka has taken a turn in poking fun at American politics. Over the weekend, social media users buzzed over the company’s bold new ad campaign targeting President Donald Trump and his campaign’s ongoing scandals over alleged collusion with Russia.

The snarky ad reads: “Made in America but we’d be happy to talk about our ties to Russia under oath.” The line is a sneer at Trump’s claim during a press conference that he would be willing to testify under oath about the James Comey investigation.

Although vodka originated in Russia, Smirnoff vodka, in particular, is made in the U.S. and owned by a British company, Diageo.

“The recent interest in American-made products created the perfect opportunity to reinforce that fact and the brand’s roots in Russia — with a wink and nod to current affairs,” a Diageo spokesperson told CNN.

Former FBI director Comey testified last week that the president had pressed him to drop a probe into ex-national security adviser Michael Flynn. Attorney General Jeff Sessions will testify at a public hearing of the Senate intelligence committee on Tuesday.