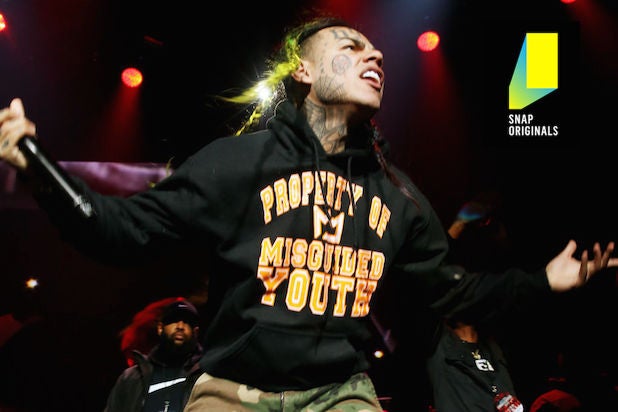 Snap Inc. is doubling down on its original content push on Wednesday, with the Snapchat parent company adding eight new shows to its slate, including a new docuseries on rapper-turned-federal informant Tekashi 69.

The series, “Tekashi 69 Vs. The World,” will be an up-to-the-moment chronicle of the Brooklyn native’s meteoric rise to rap stardom, followed by his equally swift fall from grace. Tekashi 69, whose real name is Daniel Hernandez, testified last week in New York City against the Nine Trey Gangsta Bloods, while aiming to receive a favorable sentence on racketeering and other charges he pled guilty to earlier this year. Snapchat’s docuseries will include episodes on his trial and pending prison sentence. The first season is being produced by Complex and will have an eight-episode run this fall. Future seasons of the “Vs. The World” franchise will take similar in-depth looks at the biggest names in entertainment and sports, according to someone with knowledge of the company’s plans.

One unscripted show, “Mind Yourself,” will highlight one young person each episode that is battling a mental health issue like depression or body dysmorphia. The show will also come out early next year.

Finally, Snap has three scripted series on deck: “Everythings’s Fine,” a comedy on a young female college student that’s looking to make a name for herself in the music business while struggling with a recent bipolar disorder; “Players,” a show on a fictional NBA player’s son and how he adjusts to life in Los Angeles after moving from Indiana; and “Save Me,” a thriller on a homeschooler that goes looking for his missing digital crush.

Snap also announced it has renewed several of its originals, including “Bringing up Bhabie,” the docuseries following 16-year-old rapper Bhad Bhabie. 10 million unique viewers checked out the first season, according to Snap; the show’s second season will hit Snapchat in early 2020. Another series, “The Dead Girls Detective Agency,” will come back for its fourth season, after 55% of viewers that watched the first episode of Season 3 went on to watch the full season. (Snap did not share how many users watched the show.) The fourth season comes out this fall.

“In fact, we reach more 13-24-year-olds than Facebook or Instagram in the United States, the U.K., France, Canada and Australia,” Spiegel added.

The company’s stock price — after Snap was shelled in 2018, following a botched app redesign — has increased nearly tripled since the beginning of the year to about $17 per share. Snapchat added 13 million users during the second quarter, marking its biggest growth in several years.