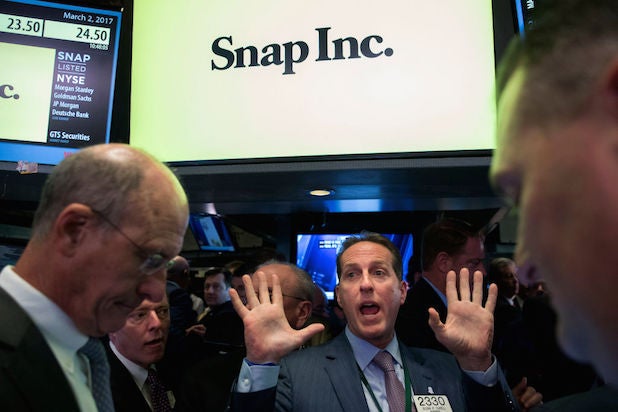 With Snap set to report Q2 earnings, everyone’s about to see how quickly Snapchat’s parent company — and its CEO Evan Spiegel — can rebound from a punch to the gut.

The company’s stock has been battered in the last three months, plummeting more than 40 percent to about $13.50 a share. Uninspiring user growth, missed revenue projections, and a whopping $2.2 billion in net losses sent investors running for the hills following its Q1 earnings.

But as its shares have cratered, there have been signs Snap is slowly pulling itself off the canvas. It’s added tools for advertisers to track performance, and acquired a company that’ll allow customers to track how Snap ads translate into in-store traffic. Time Warner signed a $100 million partnership with Snap to bring shows and ads to the platform. Snap also continues to slowly roll out original content, launching a twice-daily show with NBC News last month.

Add in the fact its mammoth losses last quarter were largely due to $2 billion in stock payouts, and Snap has an opportunity to post stronger earnings.

Analysts are expecting a loss of $189 million in revenue and a loss of $0.14 a share when Snap reports after the bell on Thursday. An earnings beat can send the stock shooting past its IPO price of $17 a share, while another lackluster quarter could have investors calling for Spiegel to loosen his tight grip on the company’s direction.

With that in mind, here are three things to keep an eye on heading into its Q2 report:

With social media platforms, it’s the same old song from investors: How many users did you add? Snap added 8 million users last quarter, a 5 percent bump from Q4 2016 — but it wasn’t enough to satiate Wall Street when compared to its previous DAU gains.

Also Read: Amazon to Take on Facebook, Snapchat With Its Own Messaging App

After Spiegel said Snap is focused on “emerging markets” during the Q1 call, look to see where Snap is gaining an audience. It added a mere 1 million international users last quarter.

But simply looking at user numbers will fail to paint the full picture for Snap. It’ll want to show Wall Street that Snapchatters are still deeply engaged. Snap touted “time spent on app” as part of its IPO roadshow, highlighting its under-25 users spent “more than 30 minutes” on the app every day. Instagram has since matched this figure. If Snap can show users are starting to spend more time on the app, it’ll indicate its content strategy is paying off.

Just as important as user growth will be showing Snap can monetize its audience. This was an issue last quarter, with average revenue per user of $0.90, a 14 percent drop from Q4 2016. It’s not fair to compare Snap to Facebook right now, but FB did post $3.40 ARPU during its second quarter as a public company back in 2012. If user growth is going to be an uphill battle considering its stiff competition, Snap has to be able to generate sales from its following.

This is where its latest ad tools will be crucial. Facebook makes a killing on ARPU because it dominates online advertising. Snap’s double-down on ads won’t come to fruition immediately, but could bolster its sales for Q2. And with Snap aiming to improve its anemic Spectacles sales by offering its sunglasses on Amazon, its clearly looking for new ways to propel revenue.

Also Read: Why Elon Musk's Tesla Is a Safe Investment in 'Future of Humanity'

We said this last quarter — and didn’t see much from Snap. Spiegel stressed an “overall importance of creativity” for Snapchat on its Q1 earnings call, but offered little guidance on its original content or new features. For a platform that’s routinely being mimicked by its rivals, Snapchat has to give users — and investors — reasons to look its way. A continued focus on augmented reality with Apple’s ARKit set to debut, or news on its upcoming shows would help create separation from the pack. Tapping into its creative roots would show shareholders why Snap was 2017’s most anticipated public offering in the first place.