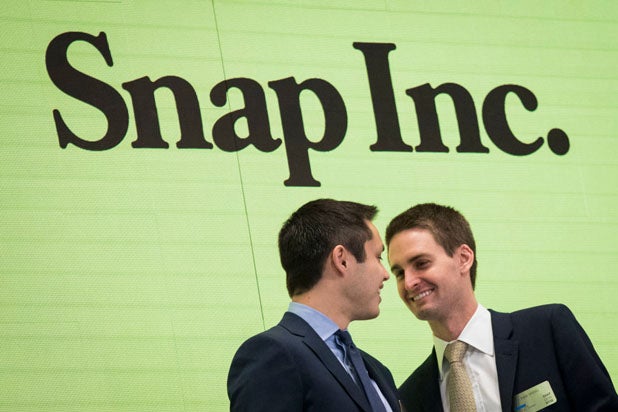 Snapchat may make its messages disappear, but its IPO conjured a bunch of cash for employees and shareholders, as parent company Snap Inc.’s stock soared 44 percent Thursday, closing at $24.48 a share — well above its offering price of $17.

Snap’s shares traded as high as $26.05 a share before fading late in the afternoon, but still finishing north of the $24 a share the stock opened the day at.

With a closing market capitalization of nearly $29 billion, Snap currently carries a higher valuation than Dish Network, Kellogg, Sysco and Viacom — and nearly as much as old media giant CBS’ $30.7 billion.

Founders Evan Spiegel, 26, and Bobby Murphy, 28, who control virtually all of the company’s voting shares, now hold stakes worth more than $5 billion apiece. Spiegel and Murphy sold some shares during the IPO, netting each of them a cool $272 million.

Spiegel will also receive 3 percent of the company’s shares as a bonus for completing the IPO. At Snapchat’s closing market cap, that bonus will be valued at at nearly $870 million.

Snap had 158 million daily active users as of the end of last year, most of whom are highly engaged with the app — exciting investors who see it as a likely place for ad dollars as companies struggle to reach a younger demographic that doesn’t watch a lot of linear television.

According to its S-1, Snapchat users 25 and older visited the app about 12 times a day, spending about 20 minutes, while younger users visited it more than 20 times, spending more than a half-hour a day on the app. Facebook, which everyone in the world seems to be glued to at all times, averages 50 minutes a day of engagement per user globally.

However, unlike Facebook, which was profitable at the time of its IPO, Snap is bleeding money at an increasing rate. In 2016, Snap reported a $514.6 million net loss on revenue of $404.5 million, after losing $372.9 million on $58.7 million in revenue the previous year.

That didn’t seem to deter investors, though, as a combination of a long time between major tech IPOs and fear of missing out of the next Facebook or Google had them snapping up shares.