Snap Inc. unveiled 10 new original shows on Thursday that’ll hit Snapchat over the next year, including a motivational series from Kevin Hart and a scripted show about a young female skater from East Los Angeles from “Twilight” director Catherine Hardwicke. At the same time, Snap said it had expanded existing deals with ESPN, NBCUniversal, ViacomCBS, and the NFL and NBA to create more content for its app, which now has 229 million daily users.

The announcements were made during the company’s second annual Partner Summit on Thursday. The new shows come as Snapchat continues to look for content that’ll keep its Gen Z and millennial users on the app — allowing the Los Angeles-based company to hit them with more ads in the process.

Hart’s new show, dubbed “Coach Kev,” will feature the star comedian as “coach, best friend and mentor all rolled into one,” per Snapchat, as he shares insight into how people can “live their best life.” Snapchat originally announced Hart was signed on for a show last summer, but the details had been under wraps until Thursday morning.

Hardwicke’s new show is titled “Frogtown” and will highlight a “badass skater living in her car,” according to Snapchat, who finds her second family when she joins an all-girl skating crew — fittingly, considering Hardwicke also directed “Lords of Dogtown.” Other new shows announced by Snapchat include “Road Trippin’,” a docuseries where popular creators Rickey Thompson and Denzel Dion go on a wacky roadtrip across the rural U.S. The show is executive produced by “Black-ish” star Anthony Anderson and comes from Bunim/Murray Productions, which has teamed up with Snapchat on shows in the past.

“Move It,” meanwhile, will be an immersive dance show that leverages Snapchat’s augmented reality technology, and “Total Badass Wrestling,” a Comedy Bang Bang!-produced show on a young and charismatic wrestler who becomes a viral sensation. (You can find descriptions of Snap’s other new shows at the bottom of this post.)

Thursday’s Partner Summit  — which was held online this year, due to the coronavirus pandemic — was also a day for Snapchat’s top brass, including CEO Evan Spiegel,  to highlight a few new features the app will be rolling out. One new aspect, Snapchat “Minis,” will allow developers to bring “bite-sized utilities” into the Snapchat ecosystem; the feature kicks off with a partnership with Headspace, which will offer guided meditations and mindfulness practices to Snapchatters directly on the app. Other new features include Snapchat users being able to take a picture and find out what breed a certain dog is, and an update to the Snapchat Map that’ll show which locations nearby are popular, while also highlighting user reviews and whether users can order food from them using several delivery apps. 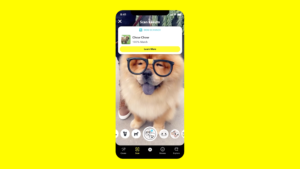 Also Read: Snap to Raise $750 Million, 'May' Use Some of the Money for Acquisitions

Here’s a look at the other new shows Snapchat announced; descriptions come directly from Snap Inc.:

transform their own faces into works of art you have to see to believe. Experience the artists’

extraordinary young innovators creating positive change, as they fight to protect our planet.

names and locking in the most coveted and demanding clients, no hairstylist slays quite like

a cowboy, on his life or death journey to become the best bull rider in the world and the first

African-American to win the title in over 35 years.

esports gambling ring to pay off his father’s debts, but he and his gaming phenom best friend

soon find themselves in over their heads in a dangerous high-stakes world.

Keep an eye on TheWrap this week for an interview with Vanessa Guthrie, Snap’s director of original content.