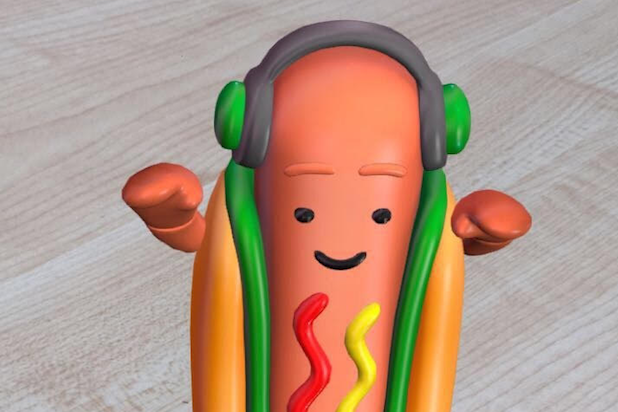 We’re in uncharted waters: one day after a Snap Inc. earnings call, and its stock is booming.

“It’s certainly quite a comeback story for Snap, and a shot in the arm that investors needed,” Peter Csathy, chairman of CREATV, a media and tech-focused business development and advisory firm, told TheWrap. “The question becomes, can they sustain it?” 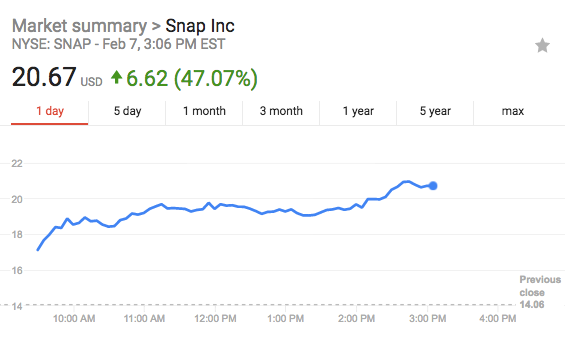 Shares of Snap Inc. rocketed more than 40 percent on Wednesday (per Google)

To keep it’s momentum rolling, Csathy said Snap needs to focus on two fronts. The first is continuing to add engaging content to Discover, its window for showcasing brand and publisher programming from companies like ESPN and BuzzFeed, along with its own shows. The second is acing its app redesign, which is currently being rolled out.

Attracting more partners to Discover should be easier. CEO Evan Spiegel noted on Tuesday Discover generated $100 million for its partners in 2017. Considering its young audience, brands will be more compelled to experiment with Snapchat now that its shown Discover has legs. Snap already has 40 shows on Discover, and is set to launch more original scripted programming in 2018. More programming, coupled with Snapchat gaining traction among Android users, will lead to more ad dollars.

The redesign will be tougher, however. Snapchat said the update will hit everyone’s phones by the end of Q1, and it started to show up for millions of U.S. users last night. The reaction was, uh, tepid, judging by the mountain of negative Twitter reactions.

“Early reactions to Snapchat’s new product roll-out by the faithful has not been kind,” added Csathy. “The company needs to turn that around fast.”

Snapchat 2.0 is supposed to make the app “easier to use,” as Spiegel said last November. But this will be a delicate balance for Snap to strike: retaining its core audience that love its “cool factor” and messaging feature, while giving new, and older, customers a reason to look its way again.

Also Read: Jim Carrey Dumps Facebook: 'What the World Needs Now Is Capitalism With a Conscience'

And from a business standpoint, Snapchat doesn’t have an unlimited amount of time to tinker. Snap had a “fine” quarter, but is still losing “kind of a lot of money,” as Wedbush analyst Michael Pachter told TheWrap. Even after lowering its cash burn 49 percent to $225 million for Q4, Pachter said “[Snap’s] got 12 quarters and then they need to go back to raising capital. They’ve got to get profitable within three years.”

Csathy doesn’t view Snap’s money situation that grimly. Companies like Netflix and Amazon, until recently, have operated at a loss, while plowing its sales back into its business, he pointed out. For Snap to keep the ad dollars piling up, it needs to find a way for its redesign to bring more kids to the club, while not scaring away the ones that showed up to begin with.