News of the hires was first reported by blog The Comic’s Comic and confirmed by an industry insider familiar with the decisions.

"SNL" creator Lorne Michaels likes to keep a tight lid on cast hires, often waiting until just a few weeks before the show’s return to confirm both hires and departures. This will be the first full season without former "SNL" regular Amy Poehler, who left the series last December.

As for the newcomers, Pedrad (at left) is familiar to Los Angeles audiences for her regular appearances with the Groundlings, the UCB Theater and Improv Olympic, as well as the stage show "After School Special." She also staged a one-woman show, "Me, Myself and Iran," and has had guest roles on primetime series such as "ER" and "Gilmore Girls." 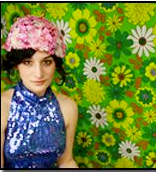 Slate (at right) is best known for her UCB New York show "Dead Millionaire," in which she plays a woman who dies and leaves $300 million to her dog. She’s also half of the comedy duo Gabe and Jenny and has been a regular snarky commentator on VH1’s "Best Week Ever."