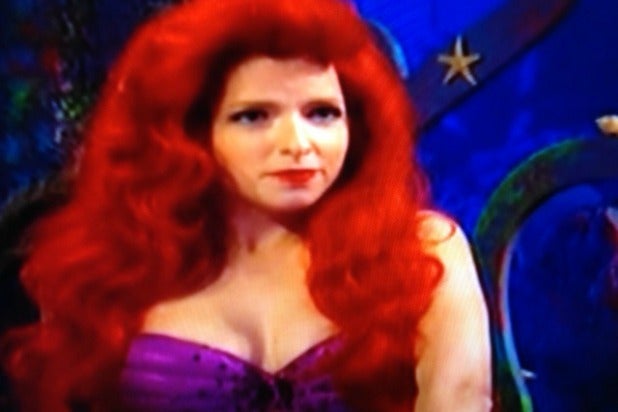 Anna Kendrick pretty much abandoned her no-more-musicals plan on “Saturday Night Live,” by singing during her monologue, rapping about dongs, and playing a baby-voiced Little Mermaid.

The “Pitch Perfect” star recently told TheWrap that after her latest batch of musicals, she doesn’t want to sing anymore — because “it’s hard as f—.” But that didn’t stop her from going for it on “SNL,” where she sang even more than musical guest Pharrell Williams. He and one of his famous hats starred in one of the last sketches of the night, in which Kendrick also sang.

The joke of the opening song was that the cast was nowhere near as excited about singing as she was. At one point she leaned into executive producer Lorne Michaels, who walked away.

Later Kendrick joined most of the show’s female cast and chart-topping Swedish duo, Icona Pop, for another musical number that began with them lamenting that men seem to have all the fun when it comes to international pimping. So they boarded a plane to sing about dongs around the world. Kendrick rapped about a three-minute dong hunt.

“Each dong is like a snowflake, except that it’s a dong,” sang Kendrick.

In the Little Mermaid sketch, underwater villainess Ursula offered to grant Ariel a wish in exchange for her voice — before discovering that she sang in the babyish tones of Kesha and Britney Spears.

Other strong sketches included an opening about GM’s ignition key mess, and a “Fox and Friends” segment in which Kendrick played an “Obamacare Survivor.” Among her health conditions: “If I drink a lot of alcohol, I just blackout.”

“Barack Obama said if I liked my doctor I could keep him,” she said. “But because of a ‘court order’ I am not allowed within 500 yards of my doctor.”

The skit ended with the usual series of corrections. This edition’s included “‘Vaping’ is not having sex with a vacuum cleaner” and “Pop Tarts do not cause ‘splosions.'”

A highlight of Weekend Update was Kate McKinnon as German Chancellor Angela Merkel, complaining about how much time she’s had to spend dealing with Russian President Vladimir Putin.

“Working with Putin is like being cornered at a party by a guy who just started CrossFit,” she said.

Bobby Moynihan, meanwhile, played “Game of Thrones” author George R.R. Martin, who explained that he’s had trouble coming up with new stories because he’s running out of interesting names.

“You know the White Walkers? I literally named them after I saw a white guy walk past me,” he said.

Later in the show, Kendrick danced with Taran Killam — and insouciantly smashed a cup — in “Les Jeunes de Paris.”

The show ended with Kendrick and Bayer as twin sisters — one much more talented than the other — auditioning to be Williams’ backup singers.

Dongs All Over The World