Singer Lizzo pulled double duty as both host and musical guest on NBC’s “Saturday Night Live” this weekend, and decided to address the rumors that she’s pregnant with Chris Evans’ baby.

“I’ve read a lot of gossip online that I’m dating every little white boy in Hollywood,” she started the bit in the monologue. “They think I’m collecting members of One Direction like Infinity Stones. I even heard a rumor that I’m pregnant with Chris Evans’ baby. I have no idea where that one started. It could be the TikTok I did where I said, ‘I’m pregnant with Chris Evans’ baby.'”

Last summer, the TikTok video caused a wave of chatter. It was really only the latest in a series of TikTok videos in which Lizzo professed her ongoing crush for the “Captain America” star. He even responded to her via a Twitter DM, which Lizzo posted a screenshot of.

“Hi! Just heard about our little bundle of joy my mother will be so happy lol,” he wrote.

Later that year, fans even started dream-casting the duo in a remake of the Whitney Houston-Kevin Costner drama, “The Bodyguard.” — to which Lizzo gave her cheeky stamp of approval.

You can watch Lizzo’s full monologue above. 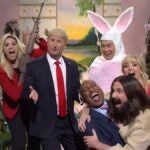