After two weeks off, “SNL” returned to kick off the first of three November episodes with a pretty basic series of jokes about this week’s big political news items.

But then new cast member James Austin Johnson showed up to steal the whole sketch (and, we’re being honest, absolutely save it) by finally doing the thing that made him famous enough to get noticed by “SNL”: His amazing Donald Trump impression.

The sketch was built around Cecily Strong as Fox News personality Jeanine Pirro, running through the grab bag of things that Republicans are angry about. This included Green Bay Packers QB Aaron Rodgers’ antivaxx views, and the completely made up “Critical Race Theory” panic that partly contributed to Republican Glenn Younkin’s upset victory in the Virginia Governor’s race this week. 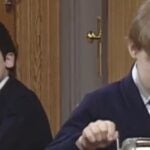 First, Pete Davidson came out as Aaron Rodgers to run through Rodgers’ antivaxx nonsense. This included a pretty decent joke about how Republicans keep using the abortion rights slogan “my body, my choice” to justify their refusal to protect themselves and other people from COVID-19.

Then Alex Moffat came on as a particularly smug Virginia Governor-Elect Glenn Youngkin to talk about his upset win — which thankfully mocked the fact that Republicans screaming about CRT clearly have no idea what they’re even talking about. Also Heid Gardener showed up as a parody of the Virginia Republican mom who told the whole world in 2011 that her 17-year old son was a baby who couldn’t handle reading Toni Morrison’s “Beloved.”

Then Johnson showed up as Trump to take credit for Youngkin’s victory and things went off the rails so accurately it kind of felt like one of Trump’s actual adderal-esque rally rants. We actually weren’t sure if that would ever happen. As we said, the impression is what got him noticed, but for a while at least, “SNL” had moved on from Trump once Alec Baldwin stepped down from the role. (America, not so lucky.)

But Trump supporters played a role in Youngkin’s victory, so he was in the news this week. As good an excuse as any to demonstrate that “SNL” doesn’t need to re-hire Baldwin should it suddenly need a regular Donald Trump again.

It’s really hard to do it justice by describing it, so instead, we suggest you just watch it in its surreal, rambling glory.

You can watch the entire cold open in the video above.