It’s been a pretty busy week, news-wise. Even the ongoing assault on women’s basic rights and freedoms by anti-abortion Republicans — and SCOTUS justices appointed by Republican presidents who didn’t win the popular vote — had a lot of new wrinkles.

But in the cold open of Saturday’s episode, “SNL” decided last week’s (very good) sketches were enough and instead opted for a sketch based on the trial of Johnny Depp’s defamation suit against Amber Heard. Even though the trial wasn’t even happening this week. And yes, the gag was exclusively based on the infamous mattress pooping incident several weeks after the testimony about “human fecal matter” sort of faded from the discourse.

It started, weirdly enough, with Kate McKinnon as MSNBC talking head Nicole Wallace, who noted people are watching the network “because you have nowhere else to place your anger.” 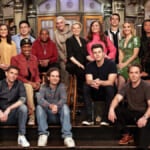 Also Read:
‘SNL’ Exits? Who Is Lorne Michaels Talking About When He Says 2022 Could Be ‘a Year of Change’?

Then she teed up the trial, which she said “is not the most pertinent story of the moment,” but noted that it’s “nice to have a news story we can watch and collectively say ‘glad it’s not me.'”

The frame joke was that even the judge admitted the tabloid twists of the trial are fun, which is the whole point of watching. The sketch itself focused on a fake video of Johnny Depp’s employees discovering the infamous poop mattress.

As Strong’s judge said during the sketch, “we don’t have to watch any of it. But we want to, so hush.”

Do we? Only you can answer that for yourself. Watch the clip below now: