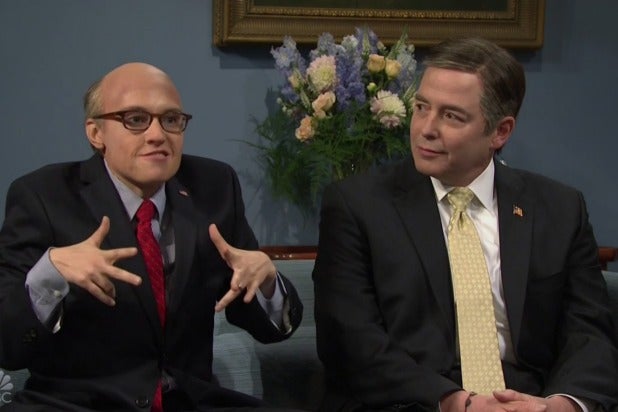 At the start of the show’s cold open, Vice President Mike Pence (Beck Bennett) met with Trump’s lawyer Rudy Giuliani (played by Kate McKinnon, as usual) and Attorney General Bill Barr (Aidy Bryant) to discuss how they might be able to weasel out of the impeachment inquiry.

After some back and forth — with plenty of Halloween-season jokes about how Giuliani is a vampire — they invited Broderick’s Pompeo into the room. And right out the gate there was a Ferris Bueller joke.

As Broderick as Pompeo walked in, a surprised Pence asked, “Weren’t you subpoenaed by Congress?”

“I was, but I think I bought us some time,” Broderick as Pompeo said. Then the scene cut to Mikey Day as Democratic Congressman Adam Schiff, channeling Ben Stein’s history teacher from “Ferris Bueller.”

One of the sketch’s running gags had members of Trump’s cabinet clearly planning to flee the country and leave Pence alone to deal with the mess by himself. Bueller’s Pompeo got in on the act.

“There’s a whole list of countries that would love to have us,” he said. “North Korea. Saudi Arabia. End of list.”

It was then discovered that the president of Finland — actually Alex Moffat — was somehow still in the White House two days after his meeting with Trump. Broderick-Pompeo took this as his opportunity to bail, nervously asking if Finland is a good place to live.

“Oh yeah, that’s gonna work out great, I can’t wait for that to happen,” he said, before a play on a classic Ferris Bueller line.

“You know, impeachment moves pretty fast,” Broderick said. “If you don’t stop and look around, you might miss it.”

Watch some of the sketch in the clip below: