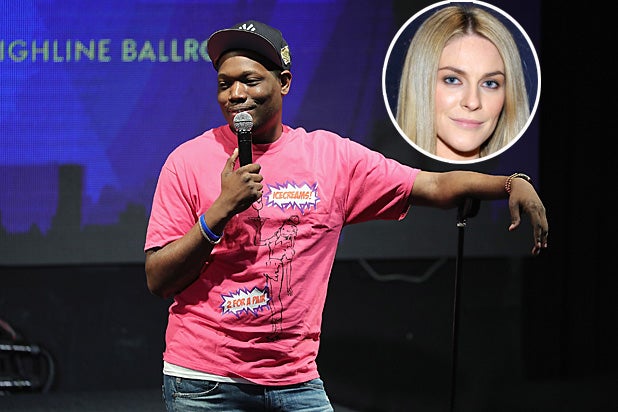 Married to the MOB founder Leah McSweeney will not be swiping right if Michael Che pops up on her Tinder, Hinge or Bumble again.

The “Saturday Night Live” star earned the ire of the streetwear fashion line CEO when they matched on a dating app. She claims she was not impressed with his game — but Che won the support of social media by saving their enlightening text messages.

“I met a comedian, I’ve dealt with a few comedians. They are the worst, I don’t even know why I entertain this but I have to say … Michael Che is so arrogant and so rude and disrespectful that I cannot even believe that someone … you’re like a D-list celebrity to me,” McSweeney said on her “Improper Etiquette” podcast on Tuesday, the New York Post reported.

“That’s why I don’t even care that I’m saying his name. I’m not like blowing up Jay Z’s spot.

“Why are you on a dating app if you hate women? Literally, you’ve never met me and you’re texting me like I’m a stupid bitch … texting me and being mad rude,” the women’s fashion executive continued. “He kept just texting me, going, ‘I’m fat. Does that turn you on?’ And I’m like, ‘you’re fat? I think I’ve seen you and you’re not fat, OK.'”

However, Che tells a very different story — and he was happy to share a series of text messages dating back from September 2016 to January 2017 with the Post.

McSweeney texted again on Dec. 29, “U hate me cus I’m white. Our conversations r everything to me btw. We have a lot of friends in and if anyone of them saw this I would b so ashamed.”

Potential true love was nipped in the bud on Jan. 2, when McSweeney wrote, “Do u ever want to meet up? Or r we just gonna text each other randomly until eternity? Well I did think it was odd u kept saying ur fat,” according to the Post.

Che replied, “I [don’t] wanna meet up. You text really strange declarations looking for a reaction, and I don’t wanna know what’s the real life equivalent of that.”

And that, was reportedly that, until McSweeney took to the airwaves.

Che had the last laugh though, with this drop the mic (or the receipts) quote to the Post: “For the record, I am proud of my curves,” he said.

As with all juicy dating drama, the saga lit up social media on Wednesday, see the tweets below.

When you try to blow up MIchael Che outta revenge for getting curved but he has the receipts https://t.co/4ziidwYCwg

Michael Che after he proved that hoe wrong. pic.twitter.com/9zB9am4GzS

Leah McSweeney/Michael Che situation is like the Leah Dunham/Odell Beckham Jr. situation 2.0 but with texting. It's out of control. *smh*

My fave from Michael Che: 'you text really strange declarations looking for a reaction &I don't wanna know the real life equivalent of that' pic.twitter.com/GDXHywTlae