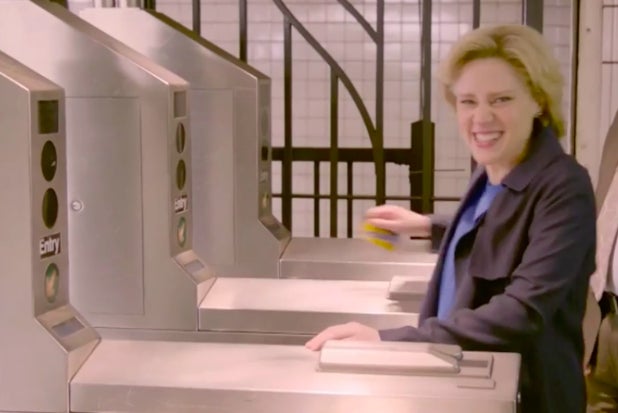 In a week both Hillary Clinton and Bernie Sanders had some trouble with their subway cred, “Saturday Night Live” opened with a merciless mockery of Clinton’s Metrocard skills.

In a cold open in which Clinton (Kate McKinnon) tried to prove her New York City bona fides, Clinton declared the subway “the best way to get around” before sliding her card, to no avail, and crashing repeatedly into the turnstile.

Here’s an excerpt from the skit:

With the New York primaries coming up April 19, the Russell Crowe-hosted “SNL” was unsurprisingly focused on politics in its early minutes. We also saw Kenan Thompson play the Rev. Al Sharpton — opposite the real Sharpton — as they wondered about Donald Trump’s appeal with black voters.

Three words that answer the question, "How is Trump doing with black voters?" #SNL https://t.co/FcY5vZ9BxS

Both sketches relied heavily on the malapropisms of the main characters. Clinton/McKinnon spoke about how great it was to be in “the fat apple,” and referred to The Mets as The Meets; Thompson/Sharpton talked about an Al Gore Rhythm, when he meant an algorithm. The actors’ energy brought to the proceedings to sheer silliness, a consistent characteristic of this episode. Take, for example, the Beck Bennett and Taran Killam Preparation H commercial parody.

In his hosting debut, Crowe acted in the tradition of Alec Baldwin, proving that serious actors can also bring great silliness. He began his monologue with a commentary that the perception of him being so serious was actually wrong, showing clips from his most dramatic fare and making a case for why these films were actually funny.

You there! Watching #SNL with @russellcrowe right now! You're amazing. pic.twitter.com/qXCSDU3SRy

Crowe also shined as an oversexed German professor on a dating game sketch, and as a hologram of Henry VIII in a museum exhibit, making appeals to female passersby with aggressive come-ons like, “I long to see your bosom swell with my son’s breakfast.”

Musical guest Margo Price brought her honky tonk sincerity to “Hurtin’ (On the Bottle),” which came out last year, but feels like a classic already. Her traditional performance meshed well with the Merle Haggard tribute that appeared on the screen afterwards, and we can only hope this 32-year-old Nashvillian sees as long of a country career as the Okie from Muskogee.

“Weekend Update” stayed mostly political, and broke the spirit of silliness. But Colin Jost and Michael Che’s biting commentary offered a welcome variety. They chided candidates who rode the subway in New York, and begged Ted Cruz not to to even come to the city.

Kyle Mooney got Che to break also, with an epically drawn-out return of his veteran standup character, Bruce Chandling. The best thing about Mooney is that he commits so hard to a joke, even when the joke is so purposely bad, and he works it and turns it inside out until it becomes funny again.

The third break in the show came when Leslie Jones played “Shanice Goodwin: Ninja,” in an action movie sendup, and got Thompson to crack up with her absurd physical comedy.

Elsewhere in the episode, Crowe shined as Pete Davidson’s “uncle’s friend Terry,” on a survival reality show. And the Good Neighbor guys–Bennett and Mooney–brought back their they-may-actually-be-making-fun-of-the-developmentally-disabled duo for a pre-filmed segment where they were hired at their favorite arcade. These characters can be funny, but it’s tough to laugh wholeheartedly, because, really, umm, are they making fun of the developmentally disabled?

Price’s second song, “Since You Put Me Down” was more classic country goodness, with a refrain of “I killed the angel on my shoulder with a fifth of Evan Williams.” If that ain’t country, well, her floor-length dress with tassled arms sure was!

The end of the show brought another questionable pre-filmed sketch, with the return of Mike O’Brien, who played Oprah Winfrey in the definitive biopic about her. Is it really okay to laugh at a skinny pasty white guy playing such an iconic figure (one who is most decidedly not a skinny pasty white guy)? Maybe. Maybe not. But was this silliness in keeping with the rest of this episode? Sure!