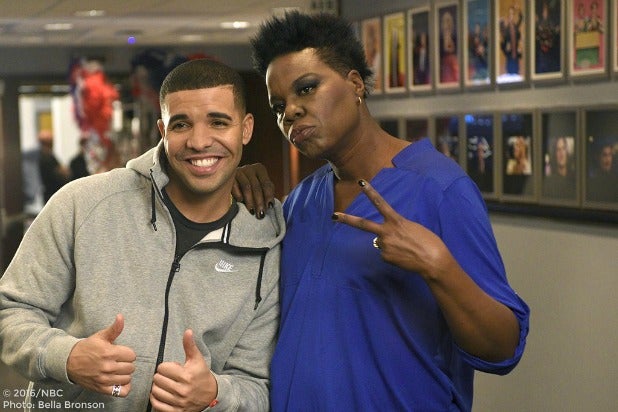 “We’ve got a great show! Drake is here as musical guest.”

This is how Drake closed his monologue this week for his second time hosting “Saturday Night Live.” But unfortunately, it seemed that only the second part of his kicker was true.

This was not an “SNL” for the record books. Drake‘s turn as host this time felt stiff. His musical performance was way better, but we’ll get to that later.

His monologue centered around a song about how he gets hurt when you make him into a meme. But the memes themselves when showed upon the screen were funnier than the actual lyrics to the song. Seriously though, that meme of him as E.T. is tough to contend with. But the song was just too hokey.

In the first proper sketch of the evening, Drake played a lackluster employee at a car rental agency. The running joke was that he paid no mind to what customers heard when he was on the telephone, which was mildly funny. Jay Pharaoh, as his manager, delivered some great lines though, pronouncing every possible word that he could to include the errr sound into it. (Lunch becomes lernch, etc.)

But Drake wasn’t the only one who was phoning it in.

The cold open, about Trump enlisting Chris Christie to help him choose a vice president, fell flat. It’s not that Darrell Hammond and Chris Christie don’t own their impressions, respectively, but the jokes weren’t there, aside from the part where Trump asked if Paul Ryan might consider being Trump’s VP, and Christie responded,  “He said, ‘Not right now,’ but that he will see you in hell.”

The early highlight of the episode (and the one that you’ll see in your feed a bunch this week) was the parody of “American Ninja Warrior.” At first it was spot-on, but it didn’t quite elevate the form enough. But when Bobby Moynihan turned on the physical comedy, the sketch achieved new heights. Dressed as a superhero of sorts called The Tornado (as a tribute to his town, which was destroyed by a tornado). The writing here was also sharper than in other sketches in this episode. Drake‘s best line of the evening may have been, “this tornado showed its penis,” after a particularly difficult turn for Moynihan’s character.

Other highlights included Beck Bennett reprising his Dick Patterson character, the successful businessman with the body of a baby. Though recycled characters aren’t always a recipe for success, it was a welcome environment to see this character in the situation of being considered as an alternate candidate for the Republican party who might be able to overtake Trump.

Drake‘s acting may not have been up to his “Degrassi” level but his musical performances were a different story. Introduced by Chris Rock, “One Dance” was on theme with the “Hotline Bling” video, as he danced in a light box in a way that felt more courageous than how most rappers would move. The song itself was aces as well. During “Hype,” he channeled all of his anger, wading through a layer of fog, as snow flurries accentuated the cold rage of the song.

“Weekend Update” was an unlikely gem of this episode. Predictably, Colin Jost and Michael Che turned up the heat on Donald Trump, skewering the Republican candidate relentlessly about allegations that he posed as his own publicist. The cameos were stellar as well, with Kate McKinnon bringing her Olya Pavloski character back to share that her poop is gray (in context it’s even funnier) and Leslie Jones discussing how some of the biggest stars didn’t become successful until later in life (again, it’s funnier in context than what I’m describing here). But the best cameo of this segment belonged to Jay Pharoah, whose firsthand account of an emergency rapper’s meeting that Jay Z called to discuss his marital problems was incredible. As with his black actors meeting segment a few weeks ago, his impersonations were spot-on. Here he skewered HOVA, Lil Wayne, 50 Cent, and Drake, the latter of whom appeared with Pharoah and took offense at the way he was being impersonated, but he eventually acceded that Pharoah had totally nailed it.

“Black Jeopardy” was another highlight of this episode. The sketch was a classic fish-out-of-water setup with Drake playing a character that Kenan Thompson‘s host character criticized with the line, “Canada’s effecting your blackness.” Drake‘s character’s culturally blind guesses incessantly disappointed Thompson’s character, and Thompson does “wits end” quite well: “I know you’re speaking English, but it ain’t my English,” said Thompson’s character to the Canadian.

The next sketch, “Drake‘s Beef,” was a pre-filmed segment where Drake hilariously made fun of his own emo tendencies. You’ll see this one in your feed a lot this week too. In the sketch, cast members unthinkingly diss Drake, and he internalizes his anger in the most melodramatic way possible, rapping lines like,  “I had like 10 sips left” about the bottle of water that the cleaning lady removed from his table before he was ready to surrender it. Funny stuff, so it’s curious that it was so late in the episode.

In the final sketch of the evening Drake played a chaperone at a high school dance with a strange set of regrets that involved strong displays of friendship from horrible historical people. With this final performance he hurt the good will he had built up with the previous string of sketches. But it was more the lines themselves that were lacking than it was Drake‘s delivery of the lines.

Drake did warm up as the show progressed, but there were quite a few instances where the writing didn’t quite match up to the level of previous episodes this season.