Thanks to suddenly hip host Betty White, the May 8 “Saturday Night Live” scored its highest national 18-49 and total-viewer results in a year and a half, NBC said.

According to live-plus-same-day national viewing figures from Nielsen, those figures are the highest since the pre-election telecast of November 2008. 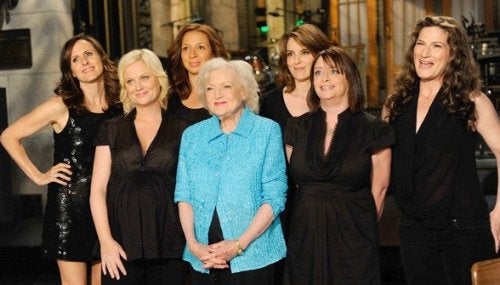 The May 8 show averaged a 4.6/18 in the key adults 18-49 demographic and 12.1 million viewers overall. Those are the highest numbers for the series since Nov. 1, 2008, when it scored a 5.2/19 and 13.0 million viewers overall for a telecast hosted by Ben Affleck with musical guest David Cook and appearances by Republican presidential nominee John McCain and Tina Fey as Sarah Palin.

Those two aside, however, Betty White had the top-rated “Saturday Night Live” in 18-49 since Jan. 10, 2004 (Jennifer Aniston and Black Eyed Peas) and the biggest in total viewers since Sept. 24, 1994 (season premiere, Steve Martin and Eric Clapton).

“Saturday Night Live” was the top-rated telecast on Saturday night, topping all primetime programs on all major networks.

Maybe they should have Betty White host every week.