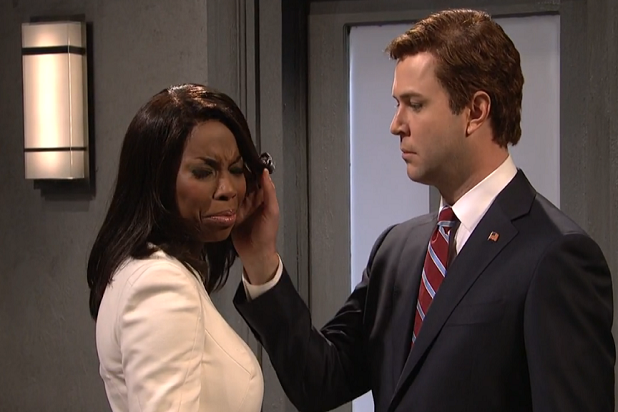 In a skit revolving around “Scandal,” Dunham played an airheaded new member of Olivia Pope’s team who’s utterly incapable of keeping up with the team’s breakneck pace.

The skit also poked fun with Pope’s inability to stop interacting with the, uh, presidential staff.

“And who is that?” Jost asked.

“That’s me,” the faux McConaughey replied.

The episode fired off shots at other Hollywood bigwigs during a segment featuring Jay Pharoah as comedian Katt Williams hosting the talk show “Pimpin’ Pimpin’ Pimpin’.”

The skit, which included Dunham as an exceedingly loopy Liza Minnelli, also featured a portrayal of an out-of-it Harrison Ford.

“I think I speak for everyone in the world when I say, ‘What the hell happened to you?’ I mean, seeing Indiana Jones with an earring is like seeing Darth Vader in Uggs,” Pharoah exclaimed, later adding, “This dude is looking less like Harrison Ford and more like Rob Ford.”