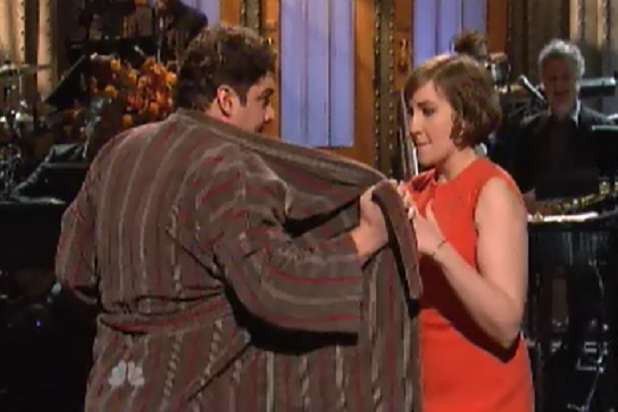 Lena Dunham has apparently developed a sense of humor about the copious amounts of nudity on her HBO series “Girls.”

Dunham, who famously bristled at a question from TheWrap about her nudity on the series during a Television Critics Association earlier this year, cracked wise on the topic during her opening monologue on “Saturday Night Live.”

During the monologue, Dunham cited the old saw about public speaking, “If you’re nervous about giving a speech, just picture the audience naked,” then joked, “or at least imagine that your audience hasn’t seen you naked.”

The monologue then developed into a running joke about people revealing too-intimate details about their sex lives to Dunham, culminating in cast member Bobby Moynihan opening his bathrobe to Dunham.

“Hey, is this normal?” Moynihan asked, his groin facing Dunham. “No, I’m just asking, is this the right number of these?”

Dunham further riffed on the nudity theme in a skit spoofing the new movie “Noah,” pretending to star in a Biblical film based on the Adam and Eve tale in which she appeared, naturally, naked throughout.

The episode opened with a cold open featuring “Non-Stop” actor Liam Neeson, spoofing both president Obama’s face-off with Russian president Vladimir Putin, as well as his own recent career as an action hero.

“I do have a very particular set of skills,” Neeson intoned, with Jay Pharoah’s Obama by his side. “By which I mean is, I’m an actor in Hollywood, with a lot of connections.”

Another guest-starring appearance came in the form of “Mad Men” star Jon Hamm, who guested in a skit revolving around a show titled, “What Are You Even Doing? You’re Being Crazy,” a sort of distaff version of the “Wayne’s World” skits of yore.

The “Weekend Update” segment of the episode took another jab at the recent tensions between Obama and Putin, with co-anchor Cecily Strong noting that Obama warned Putin that he’s “living on the wrong side of history,” which are “pretty strong words for a guy who still uses a BlackBerry.”

The National served as the musical guest for the evening.