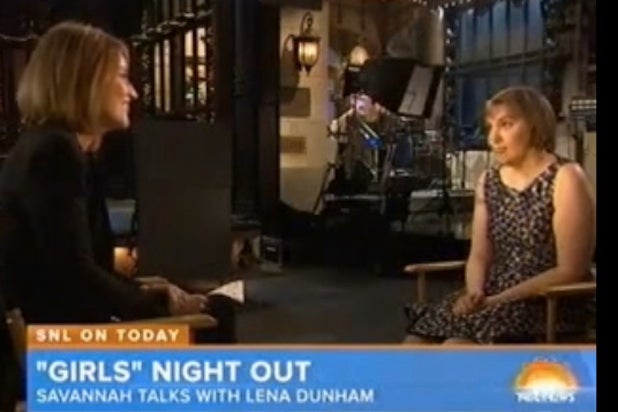 Savannah Guthrie revealed to Lena Dunham during an interview Friday on the “Today” show that she was the biggest “Girls” fangirl of all and actually constructed storyboards to pitch being the fifth girl. The HBO star thanked her for the effort but doubted whether she’d bare all on screen.

“I feel like I should confess to you that I kind of imagined being the fifth girl,” Guthrie giggled.

Guthrie pulled out several fantasy sketches which painted the “Today” anchor into the show.

“And you’re probably thinking you seem really boring and straightforward and I don’t see a role for you in the show, I took the liberty of creating storyboards to pitch my character,” Guthrie explained. “Here I am helping Hannah study for the bar exam because I don’t think she’s achieving her potential.”

Also read: How Lena Dunham Self-Censored Herself for ‘SNL’

“I love it so much!” Dunham exclaimed. “And that’s the friend Hannah deserves!”

Guthrie continued to vividly describe how she would interact with Dunham’s other cast members if she had a role on the show.

“Beautifully done, Savannah,” she added. “I’ll take it back to the writers room and give it serious consideration.”

“Honestly, I’m not sure whether you’re willing to show nipple,” the HBO star quipped.

“You know what, spoiler alert! I’m not,” Guthrie conceded.