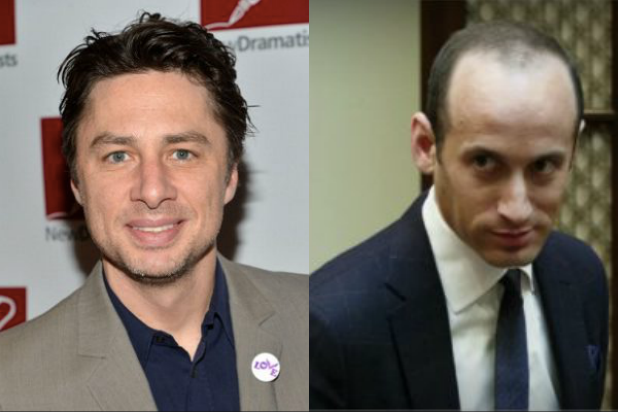 Believe it or not, there’s at least one person who was inspired by Trump senior policy advisor Stephen Miller’s Wednesday anti-immigration epithet: actor Zach Braff.

The “Scrubs” veteran has expressed an interest in parodying Miller for “Saturday Night Live,” and took it upon himself to personally campaign for it.

On Wednesday, Braff tweeted a headshot of Miller’s face along with the caption, “Dear Lorne Michaels, I can do this. Put me in Coach.”

Dear Lorne Michaels, I can do this. Put me in Coach. pic.twitter.com/2xGB3byqbu

A lot of people on Twitter seemed to be supportive of the proposed role. Some even pointed out a striking resemblance between Braff and Miller (striking in a sense that Braff’s face was Photoshopped onto Miller’s body):

I'm feeling this casting… but you're gonna have to work on your dopey, pouty face Zach pic.twitter.com/EWzR4ZtFmH

i TOTally see it. pic.twitter.com/UHQZNmkS4H

Though there’s a bit of an age difference between the two (Miller is 31, Braff is 42), this could work.

However, Braff would have to wait until fall when “SNL” returns from its summer hiatus. In the meantime, you may want to scrub away from your mind the memory of terrifying face swaps above.