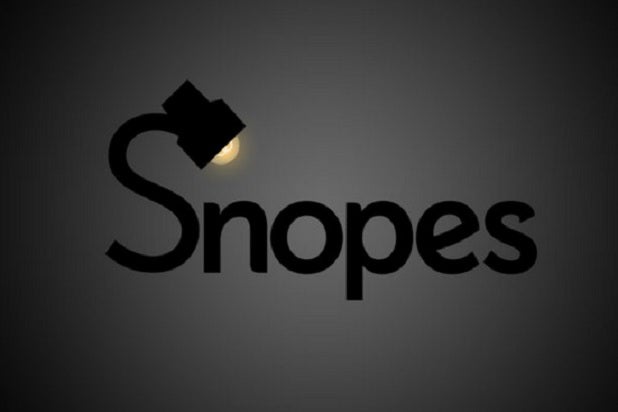 Here’s a fact for you, internet truth-seekers: Snopes is seeking donations, claiming that the rumor-debunking website is in danger of shuttering because the site is essentially being held “hostage.”

A GoFundMe campaign launched Monday by Snopes co-creator David Mikkelson states that the site “is in danger of closing its doors” because it has been cut off from its “historic source of advertising income.”

“Snopes.com, which began as a small one-person effort in 1994 and has since become one of the Internet’s oldest and most popular fact-checking sites, is in danger of closing its doors. So, for the first time in our history, we are turning to you, our readership, for help,” the fundraising campaign reads.

“We had previously contracted with an outside vendor to provide certain services for Snopes.com. That contractual relationship ended earlier this year, but the vendor will not acknowledge the change in contractual status and continues to essentially hold the Snopes.com web site hostage,” the plea continues. “Although we maintain editorial control (for now), the vendor will not relinquish the site’s hosting to our control, so we cannot modify the site, develop it, or — most crucially — place advertising on it. The vendor continues to insert their own ads and has been withholding the advertising revenue from us.”

The GoFundMe campaign adds, “Our legal team is fighting hard for us, but, having been cut off from all revenue, we are facing the prospect of having no financial means to continue operating the site and paying our staff (not to mention covering our legal fees) in the meanwhile.”

Snopes’ parent company, Bardav Inc., was sued by Proper Media earlier this year. According to Proper’s complaint, Mikkelson’s ex-wife, Snopes co-creator Barbara Mikkelson, sold her half of Bardav to Proper in 2016, following the couple’s divorce.

Also Read: No, It's Not Fake News, It's Robot-Written News

According to Proper’s complaint, David Mikkelson has “engaged in a lengthy scheme of concealment and subterfuge to gain control of the company and to drain its profits.”

Bardav subsequently filed a cross-complaint against Proper, according to Poynter, alleging breach of contract, among other claims.

In a statement provided to TheWrap on Monday, Proper Media’s attorney, Karl Kronenberger, suggested that the media “conduct its own fact-check of the fundraising plea posted today on Snopes.com.”

“First, Proper Media is far more than an ‘outside vendor’ to Bardav, Inc., the company that owns Snopes. In fact, it is a 50 percent co-owner of Bardav,” Kronenberger said. “Second, in a pending lawsuit, Proper Media has alleged Bardav’s other co-owner, David Mikkelson has engaged in gross financial, technical, and corporate mismanagement, which is reflected in court documents and multiple independent media reports.”

Also Read: That G20 Photo of Trump-Putin Is Fake News

Kronenberger went on to say that Mikkelson “locked out Proper Media from management and control of the company, giving Mr. Mikkelson unfettered access to Bardav’s bank accounts.”

The statement accuses Mikkelson of attempting to “rewrite history” by erasing his ex-wife’s involvement with Snopes.

“Fourth, it is the height of irony that in today’s post, Mr. Mikkelson attempts to rewrite history by saying Snopes ‘began as a small one-person effort in 1994’ — erasing his co-founder, former partner, and wife of many years, Barbara Mikkelson, who owned 50 percent of Bardav before selling her interest to Proper Media in 2016.”

“In summary, today’s post only confirms Proper Media’s allegations that Mr. Mikkelson has drained the company’s bank accounts and is unable to operate Snopes profitably without Proper Media’s expertise and management,” Kronenberger concluded.