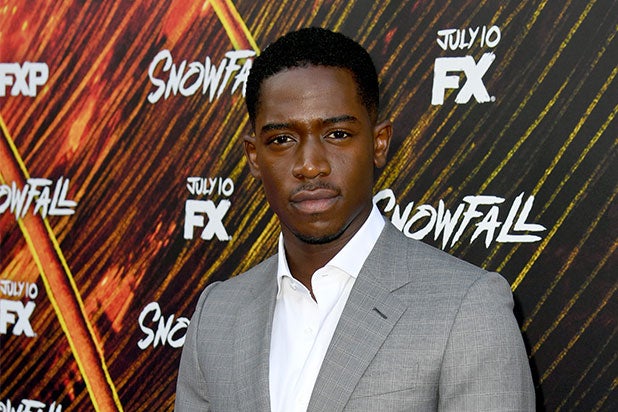 “Snowfall” star Damson Idris is set to star alongside Anthony Mackie in Netflix’s futuristic sci-fi thriller “Outside the Wire” as the second lead, an individual with knowledge of the project told TheWrap.

Emily Beecham (“Little Joe” and “Daphne”) is also joining the cast. She most recently earned the Best Actress Award at the 72nd Cannes Film Festival for her role in “Little Joe.”

Mikael Håfström, who directed “Escape Plan” and “1408,” will direct the film that 42 and Automatik are producing. Brian Kavanaugh-Jones is producing for Automatik, while Ben Pugh and Erica Steinberg are producing for 42,  Jason Spire is producing for Inspire Entertainment. Mackie will also serve as a producer, and Rob Yescombe and Rowan Athale wrote the script.

Also Read: Anthony Mackie to Star in Futuristic Action Thriller 'Outside the Wire' at Netflix

“Outside the Wire” is set in the future and follows a drone pilot who is sent into a deadly militarized zone, where he finds himself working for an android officer tasked to locate a doomsday device before the insurgents do.

Executive producers are Josh Horsfield, Fred Berger for Automatik, Rory Aiken for 42 and David U. Lee for Leeding Media. Principal photography will start later this summer. 42 has a multi-year first-look development, financing and production deal for feature films with Netflix.

Idris most recently starred in the TV series “Snowfall,” as well as the “Black Mirror” episode “Smithereens.” His other TV credits include “The Twilight Zone,” “The Missing” and “Casualty.” He also starred in Liam Neeson’s “The Commuter.” Mackie, of course, also starred in an episode of the latest season of “Black Mirror,” a Netflix show.

Next, Idris will star in “Farming,” which is inspired by Akinnuoye-Agbaje’s real-life experience with the practice of farming, a term used in the 60s in reference to Nigerian immigrants coming to Britain to foster their children out to poor white working-class families to create a better life for themselves. For his performance in the movie, he recently won the Best Performance in a British Feature Film prize at the Edinburgh Film Festival.

Beecham most recently starred in “The Village” and “Into the Badlands,” as well as “Hail, Caesar!” and her upcoming films are “Berlin, I Love You” and “Sulphur and White.” She is currently in post-production on the short “The Octopus Nest.”