Cable and satellite are going the way of the dinosaur, with the number of customers cutting the cord hitting a record high during the first quarter of 2019, according to new research from BTIG analyst Rich Greenfield on Friday morning.

It’s not a pretty picture for multichannel video programming distributors (MVPDs) or traditional cable and satellite providers like DirecTV, Comcast and Dish. During Q1, MVPDs lost a total of 1.2 million customers, an increase of 90% from the same period last year and the most ever reported for a single quarter.

And while more providers are offering affordable streaming options to convince customers to stick around (think Sling TV and DirecTV Now), it’s doing little to stem the industry’s losses.

Virtual MVPDs netted only 174,000 subscribers during Q1, marking a steep decline from the nearly 1 million viewers who signed up for VMVPDs during the first quarter of 2018. Even factoring in the new VMVPD customers, the cable and satellite industry lost more than 1 million net customers.

Also Read: How ABC News Is Dominating in Livestream Video - and Eliminating the Need for Second Screens

The BTIG chart below shows how stark the situation is for old-school TV: 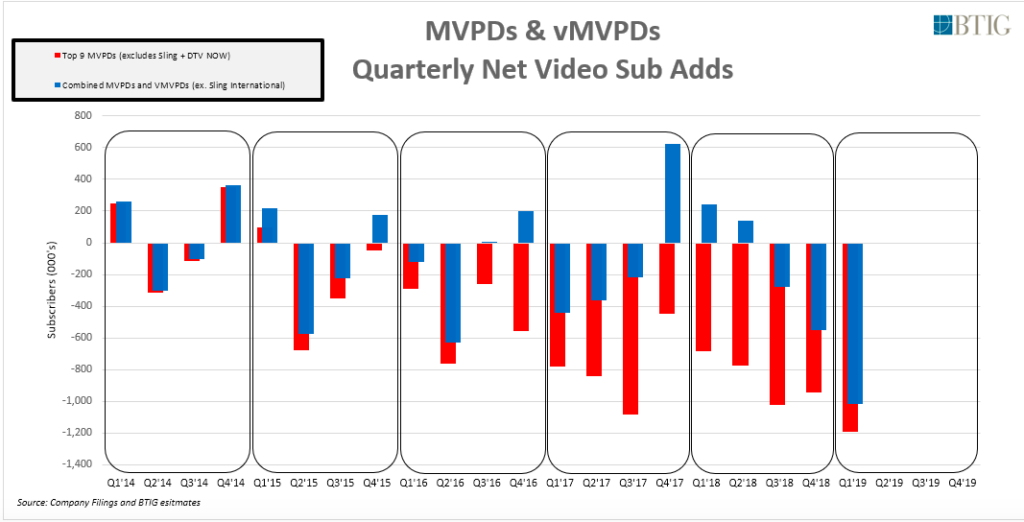 NCBU chief Steve Burke weighed in on the situation last week, saying the days of VMVPDs offsetting the losses of cable and satellite are “over.” NBCU is preparing to launch its own streaming service next year, joining an increasingly crowded field that includes stalwarts like Netflix as well as new entrants like Apple and Disney.

“You watch CNBC, you would assuming streaming — that all of the entrants are in and it’s a big battle between two or three of them,” Burke said on parent company Comcast’s first-quarter 2019 earnings call. “We actually think it’s very, very early innings — in some ways reminiscent of cable in the 1970s or 1980s.”

Have people reverted to reading books and tossed aside TV? Not exactly. While traditional TV wanes, Netflix reported earlier this month its nearing the 150 million global subscribers mark.

Hulu, which operates solely in the U.S., shared this week it has 26.8 million paying customers and 1.3 million viewers on free trials, up from the 25 million total accounts it had at the end of 2018.

With more customers fleeing cable and satellite, nascent live TV services have started to increase prices; YouTube TV raised its monthly fees 25% earlier this month, to $50, and in January Hulu With Live TV bumped its monthly fee up from $40 to $45.