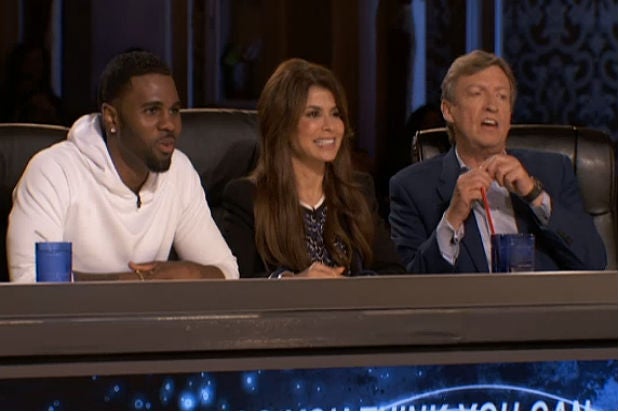 (Spoiler alert: Please do not read on if you haven’t watched Monday’s episode of “So You Think You Can Dance”)

Paula Abdul and Jason Derulo made their joint debut as judges on Fox’s “So You Think You Can Dance” on Monday and quickly got into their groove as they joined executive producer Nigel Lythgoe and British host Cat Deeley.

The 12th season of the reality competition saw a few more changes, including the contestants being divided into two categories, Stage and Street, pitting classically trained stage dancers against freestyle street artists under the mentorship of former contestants Travis Wall and Stephen “Twitch” Boss.

Also Read: 'So You Think You Can Dance' Host Cat Deeley Says New Format Could Be 'A Complete Bloodbath'

Abdul appeared more focused and serious than during her “American Idol” judging days as she critiqued the performances, while Derulo admitted he was a “pretty laid-back guy,” but still expressed rare bursts of excitement along with showing off some dance moves of his own on stage.

Monday’s premiere episode first sent the judges to Memphis, Tennessee, where Team Stage had a stronger showing than the edgier Team Street with 15 vs. 9 heading to the next round in Las Vegas.

From jazz dancers to a male stripper and even a self-confessed geek who Lythgoe said looked “like Bill Gates,” the aspiring stars came from every genre and even a citywide blackout across Memphis that plunged the into darkness couldn’t curb their enthusiasm despite delaying the auditions for a day.

Reluctant to dish out too much criticism at first, Derulo did call one hopeful “your cousin who can dance,” and suggested he bring out a workout DVD — which prompted Lythgoe to invite the audience on stage to party with him and caused Abdul call up Richard Simmons to pitch a fresh new fitness program.

By the time the auditions arrived in Dallas, Texas, the new judges had gotten more into their own rhythm, with Abdul and Derulo coming out with constructive feedback and cracking each other up by blending dance styles together such as “bar hopping” (short for ballroom and hip-hop).

The premiere episode also featured a special interview with First Lady and “So You Think You Can Dance” fan, Michelle Obama, who has partnered with the show for her Let’s Move and #GimmeFive campaign.

Watch a preview of Monday’s show below.