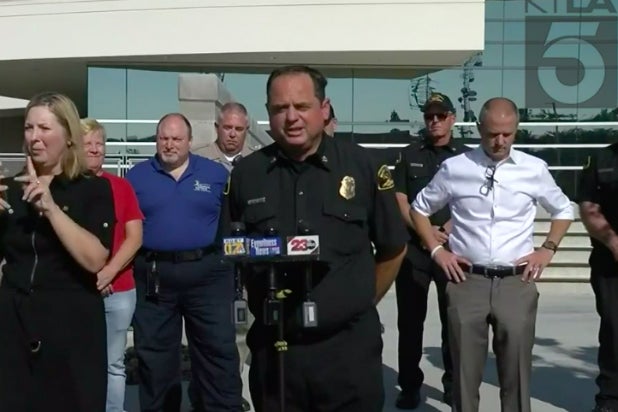 The day after a scary 7.1 earthquake struck Ridgecrest, California, there is some good news: There are no known fatalities, power has mostly been restored, and the roads are open.

“We do feel like there is damage but we don’t know the extent of it yet,” Kern County fire chief David Witt said during a press conference on Saturday. “Nobody was trapped, no major collapses that we know of. But we’re out there searching.”

Witt, who said there are also no known “major injuries,” told reporters the local Isabella Dam is OK, and while “there are cracks in roads in different places,” that damage is also pretty minor, relatively speaking.

There are some leaks in water lines, he said, but not in “major” lines. Witt (pictured above) said emergency responders are prepared should more quakes hit.

Californians and tourists are getting on with their weekend.

Knott’s Berry Farm in Buena Park is also operational, a customer service rep there told us.

Friday night’s quake followed a 6.4 earthquake on July 4. The epicenter for both quakes was Ridgecrest in the Searles Valley, about 150 miles north of Los Angeles.

The July 5 quake was the largest to hit the region in 20 years, and was followed by two 5.5 magnitude aftershocks. Some 30,000 aftershocks of 1.0 or greater are expected, the USGS has warned residents.

Caltech seismologist Egill Hauksson said the likelihood of another earthquake in the area of 7.0 or greater is now down from 6% probability to 3%, but, he added, the chance of a temblor of 6.0 or greater is 27%. “We’re likely to see maybe one or two of those in the next week,” Hauksson said early Saturday.

In magnitude, Friday night’s quake was significantly larger than the 6.6 Northridge quake in 1994, but it affected a significantly less densely populated area.