Soccer star Brandi Chastain is determined that her legacy will live on long after her death — whenever that may be.

The player, who became famous for ripping off her shirt after scoring the winning shootout goal in the 1999 World Cup Final, has agreed to donate her brain to the Concussion Legacy Foundation and researchers at Boston University, pioneers in the study of concussions and chronic traumatic encephalopathy (CTE), a degenerative brain disease.

“It is really about … can I do something more to leave soccer in a better place than it was when I began this wonderful journey with this game?” the 47-year-old said.

When asked in a Q&A with the New York Times if she had suffered adverse symptoms from the “probably a half-dozen times” in her career that she shook off likely concussions from heading the ball, Chastain replied: “There are definitely days when I turn a corner and I’m like, ‘Why did I come into this room?’ I have definitely, from time to time, thought, ‘Hmmm, I wonder if this is connected to the past 40 years of playing sports.’

“Soccer wasn’t the only thing I played. It’s crossed my mind. I do wonder about the ramifications over the next 20 years when I should be fully functioning and still doing things I like or want to do,” she continued. “I try not to get hung up on those things, because it doesn’t really matter at this point. You just don’t know.” 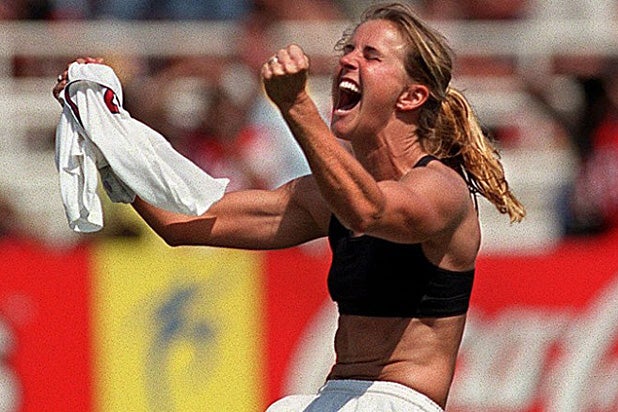 Researchers can only test for CTE after a patient has died, so upon her death, Chastain’s brain will go to the VA-BU-CLF Brain Bank, a joint project with the Department of Veterans Affairs and Boston University School of Medicine.

“I won’t need it,” she explained bluntly. “If there’s any information to be gleaned off the study of someone like myself, who has played soccer for 40 years, it feels like my responsibility — but not in a burdensome way.

“People talk about what the ’99 group did for women’s soccer. They say, ‘Oh, you left a legacy for the next generation.’

“This would be a more substantial legacy — something that could protect and save some kids, and to enhance and lift up soccer in a way that it hasn’t before. That was the impetus for saying yes. If we can learn something, we should,” the mother and youth coach based in the San Francisco Bay Area said.

While a number of high profile NFL players have recently been diagnosed with CTE, no female athletes have been found with it yet, although the sample size has been small, according to the Times. Out of the 307 brains examined by Boston University, only seven were women’s.