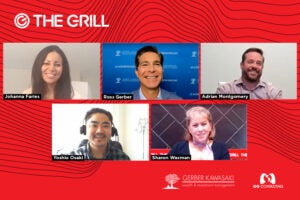 TheGrill 2020: The incentive structures of Silicon Valley have ”negative consequences on our society,“ Jeff Orlowski says

Social media powerhouses like Facebook, Twitter and Instagram are “designed” to exploit users’ brain chemistry in order to keep them glued to their phones, “The Social Dilemma” director Jeff Orlowski told TheWrap founder Sharon Waxman at TheGrill 2020 on Thursday afternoon.

Orlowski, while discussing his new Netflix documentary, said the underlying, sinister truth about the world’s biggest apps is that they’re akin to drugs.

“The word addiction gets used in very different ways, and in my mind, that word itself is not the point,” Orlowski said. “The point is, they were designed to get us to come back. It’s to figure out how to reverse-engineer what we’re most vulnerable to, most susceptible to, to come back. And what we are seeing is a dopamine response in the brain.”

As users get more accustomed to the dopamine rush they experience while on their favorite apps, they need to spend more time on them to get the same “high.” And if they decide to take a break, after years of constant social media use, they often feel a great “withdrawal,” Orlowski said.

Orlowski said he experienced this problem firsthand a few years ago, after noticing he was a “very heavy social media user.” In particular, Facebook was his go-to platform.

The issue of social media addiction and the gamification of popular apps has grown more prominent in recent years. Researchers have spent time looking at how the brain responds to apps, and the conclusions are jarring.

“The brain responds to ‘likes’ like any other reward or thing that excites the brain like food, sex or gambling,” Cal State Fullerton University/USC professor Ofir Turel told TheWrap last year. “When you get likes, the reward system lights up and releases dopamine, making us feel good.”

Another key issue that Orlowski touched on was the sheer amount of information tech giants are able to collect. The Privacy Co., which sponsored Orlowski’s conversation at TheGrill, is working to curb this issue by helping users gain back more control over their data. CEO Craig Danuloff told Waxman the company’s app, Priiv, takes account of users’ online habits and gives them a “privacy score,” followed by recommendations on how to reduce data sharing.

The app acts “a lot like a fitness program,” Danuloff said. “The goal” — cutting back on sharing data with major tech companies — “is going to take a while, but you need to take steps and you’ll make progress. And the nice thing is, the first steps you take make the biggest impact.”

When asked what the true dilemma of social media is by Waxman, the “Social Dilemma” director compared the sector to the fossil fuel industry. At first, fossil fuels were believed to offer us “power and opportunity,” Orlowski said, only it took decades to realize those benefits were overshadowed by the negative aspects that come with it. The same goes for ad-driven social media platforms — they started off promising, Orlowski said, but the privacy and mental tradeoffs may not be worth it.

“The tech industry found this amazing way to connect everybody and to not charge anything and ‘Look at this advertising business model, it seems to good to be true.’ And years later, we’re sort of realizing this is too good to be true,” Orlowski said.