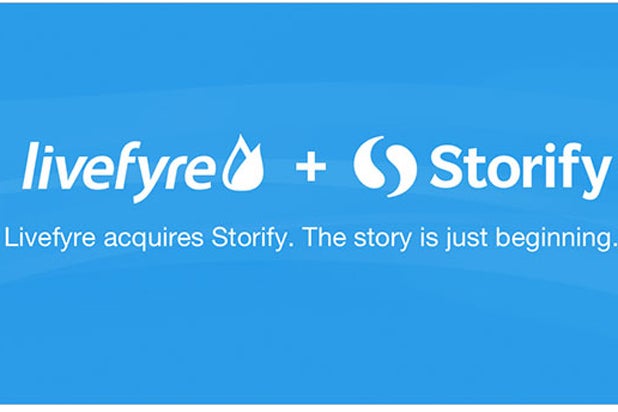 The move will bring two media-favored social curation platforms together. Livefyre is best known as a commenting platform and counts over 400 brands among its customers, including the New York Times, the Wall Street Journal, Time Inc. and the Daily Beast.

Storify allows users to curate tweets, Facebook posts and other social-media posts into a narrative of events. Over 850,000 people and brands use the platform, which introduced a paid VIP and business membership services last spring as a source of revenue. Livefyre recently announced its own new revenue stream: native ads using social media content.

“Acquiring Storify made perfect sense,” Jordan Kretchmer, founder and CEO of Livefyre said in a statement. “Livefyre powers social media and user engagement on the largest media properties and brands on the web. Storify also delivers a unique and vital curation tool for journalists and editors at many of those same companies.”

“Livefyre powers mass-scale social curation for some of the largest media companies in the world,” Storify co-founder and CEO Xavier Damman said in a statement. “Livefyre will provide the technology foundation to help Storify scale to meet enterprise customer demands. Together, we’ll take Storify to the next level and will fulfill Livefyre’s vision of powering social everywhere.”

Also read: Yahoo Promises Not to Screw Up Tumblr

Storify launched in 2010, while Livefyre was founded in 2009. A spokesperson for Livefyre declined to disclose the terms of the deal.