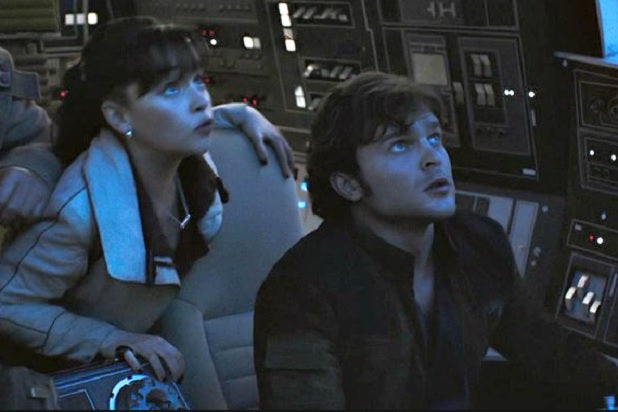 Lucasfilm’s latest effort to fill out the backstory of well-loved characters from a galaxy far, far away, “Solo: A Star Wars Story,” is full of references. The vast majority of them are to “Star Wars” in general — the original movies, the exploits of title character Han Solo, and the old Expanded Universe of comics, novels, video games and more.

You might have missed one movie reference in “Solo” that goes for something different, though. It nudges the audience to remember another classic sci-fi trilogy: “Back to the Future.”

The moment comes late in “Solo,” when Han (Alden Ehrenreich) and his crew fly through the Maelstrom, a giant space cloud filled with ice and asteroids. As Han takes over flying the Millennium Falcon, he finally gets Chewbacca (Joonas Suotamo) to sit in as his co-pilot, as the pair try to evade an Imperial blockade and a squadron of TIE fighters.

As Han dodges the fighters, he tells Chewie to deploy the Falcon’s landing gear. Han explains that he’s about to pull a move he learned from his pal Needles, the best street drag racer on Corellia. It’s a good move, which finds the Falcon skidding across the city surface of a planetoid. Han uses it to escape the fighters — even as he explains that Needles was trying the move when he crashed, and it killed him.

That sounds suspiciously similar to another Needles, who appears in “Back to the Future II” and “Back to the Future III.” The character, played by Michael Balzary (better known as Flea of the Red Hot Chili Peppers), is a guy who went to high school with Marty McFly (Michael J. Fox) and who’s always goading Marty into doing things he doesn’t really want to do. Specifically, Flea helps ruin Marty’s life with a drag race.

We first meet Needles when Marty, Doc Brown (Christopher Lloyd) and Jennifer (Elizabeth Shue) travel to the future, 2015, from 1985 in “Back to the Future II.” While there, Jennifer is taken to “her” house, which is actually the home she lives in with Marty after they got married in the future. Hiding in a closet, Jennifer sees a broken-down older version of Marty, and we overhear that he never realized his dream of becoming a musician. Marty’s mom Lorraine (Lea Thompson) mentions that his dream was crushed in a racing accident when Marty crashed into a Rolls-Royce. He broke his hand, and the legal tie-up of dealing with a rich person caused Marty to get stuck in the rut of middle age where Jennifer finds him, not unlike Marty’s dad George (Crispin Glover).

Also Read: Yes, That Was THAT Villain in 'Solo: A Star Wars Story' -- Here's What It Means

Needles appears on the scene in a phone call Jennifer watches, in which he talks Marty into doing an illegal transaction by calling him a chicken; it’s what results in the “read my fax: You’re fired!” scene. As it turns out, Needles is also responsible for the drag race that messed up Marty’s life, but we don’t get that tidbit until “Back to the Future III.”

In the third movie, Marty returns from 1885 having learned some lessons about himself, his temper, and his constant fear that people will think he’s a coward. Driving Jennifer home, Marty encounters Needles, who tries to goad him into racing by calling him a chicken again. Thanks to Marty’s character growth, he ignores Needles’ taunts, and Needles is the one who nearly crashes into the Rolls-Royce. Because he didn’t race, Marty manages to change his future, presumably for the better.

Han’s pal Needles definitely had it a lot worse than Marty McFly’s friend, but their circumstances are way too similar to be coincidental. Needles might not ever have gotten to travel through time in “Back to the Future,” but it seems his counterpart in another galaxy at least got to go out in a blaze of glory.