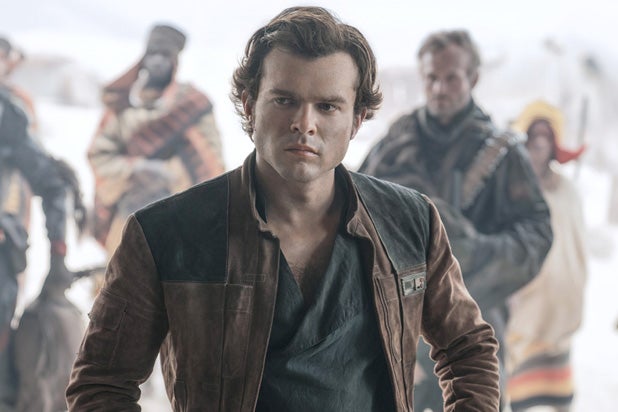 The numbers for “Solo: A Star Wars Story” barely picked up on its second Saturday in theaters, with it now projected to make $29.3 million this weekend, a 64 percent drop from its $84.7 million launch.

This amount would push the 10-day total for “Solo” up to $148.9 million, which is less than what the last anthology film, “Rogue One,” made in its opening weekend. Released in December 2016, “Rogue One” opened to $155 million and grossed over $1 billion worldwide.

Overseas, “Solo” made $30 million this weekend, and is on pace to become the lowest-grossing “Star Wars” film ever with $425-475 million globally, according to analyst estimates. Worldwide totals are expected to take a hit in the coming weeks, as “Jurassic World: Fallen Kingdom” opens in major European markets next weekend and the upcoming FIFA World Cup provides outside competition to international cinemas.

Sitting in second is “Deadpool 2,” which will cross the $250 million domestic mark with a third weekend total of $23-24 million. That puts it past the domestic run of last year’s R-rated “Logan,” which made $226 million last spring. “Deadpool 2” is also on pace to become only the fourth R-rated film to grossed $350 million domestically, joining “The Passion of the Christ,” “American Sniper” and the first “Deadpool.”

In third is STX’s “Adrift,” which posted a solid $11.5 million opening this weekend from 3,015 screens. Starring Shailene Woodley and Sam Claflin, the survival romance was made on a $35 million budget co-financed by STX. Reception for the film has been positive, with a 67 percent Rotten Tomatoes score and a B on CinemaScore.

In fourth is “Avengers: Infinity War,” which added $10.4 million in its sixth weekend and has a global total of $1.96 billion. In China, the film now has $356 million after four weekends, making it the third-highest grossing Western release in that country. Paramount’s “Book Club” completes the top five with $6.6 million, bringing its domestic total after three weekends to $47 million.

Outside the top five are OTL/BH Tilt’s revenge thriller “Upgrade” sits sixth this weekend with $4.4 million from its targeted release on 1,457 screens, and Paramount’s slapstick adult comedy “Action Point,” which has wiped out with just $2.2 million from 2,032 screens. Starring Johnny Knoxville, the film was made on a $19 million budget and received a C+ on CinemaScore.