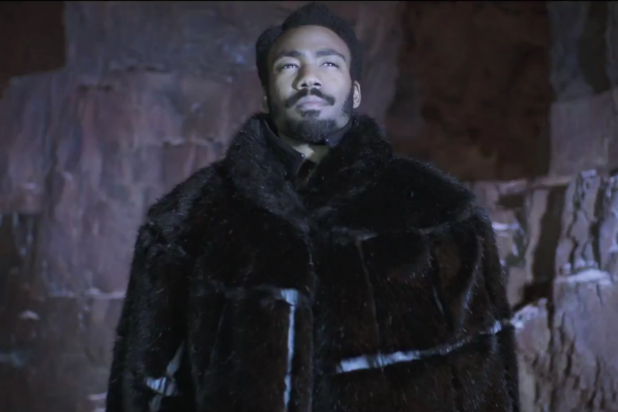 “Solo: A Star Wars Story” is expected to close out May with a bang, as the first round of early tracking projects a four-day opening of $160-175 million.

That opening would be consistent with the launch earned by the previous “Star Wars” anthology film, “Rogue One,” which had a four-day start of $172 million in December 2016. The film went on to gross $532 million domestically and $1.05 billion worldwide.

It would also mean a dramatic increase for Memorial Day weekend receipts over last year, which were the lowest since 1999. Last year, the top film for the weekend was “Pirates of the Caribbean: Dead Men Tell No Tales,” which opened to just $78.5 million over four days. According to numbers from comScore, totals for Memorial Day weekend 2017 only reached to $180.6 million, down 12 percent from the $205.4 million made the previous year and 43 percent from the record $314 million made in 2013.

But between “Solo,” “Deadpool 2,” and the holdover returns from “Avengers: Infinity War,” movie theaters could be looking at the biggest May in box office history. This weekend, “Avengers” is expected to stay No. 1 with a second-weekend total of $110-130 million, becoming the fastest film to gross $1 billion worldwide.

“Deadpool 2,” meanwhile, is expected to match the opening weekend of its February 2016 predecessor with an opening of $130-140 million. The record for the biggest May in box office history was set in 2013, a month in which “Iron Man 3” topped the charts with $379 million with $1.14 billion grossed among all films.

“Solo” stars Alden Ehrenreich as the famed smuggler in a story that shows how he came into his trade long before he met Luke Skywalker on Tatooine. Taking place at the height of the Empire’s power, the film will follow Solo as he meets Chewbacca and Lando Calrissian (Joonas Suotamo and Donald Glover) and wins the keys to the Millennium Falcon. The film also introduces new characters in Han’s life, including his mentor Tobias Beckett (Woody Harrelson) and his childhood friend Qi’ra (Emilia Clarke)

Thandie Newton, Phoebe Waller-Bridge, and Paul Bettany also star. Ron Howard directed the film, taking over for extensive reshoots after previous directors Phil Lord and Chris Miller left the project over creative differences. Lawrence Kasdan wrote the screenplay — his fourth in the “Star Wars” series — with his son, Jonathan. The film will premiere at the Cannes Film Festival on May 15 and will open in theaters on May 25.