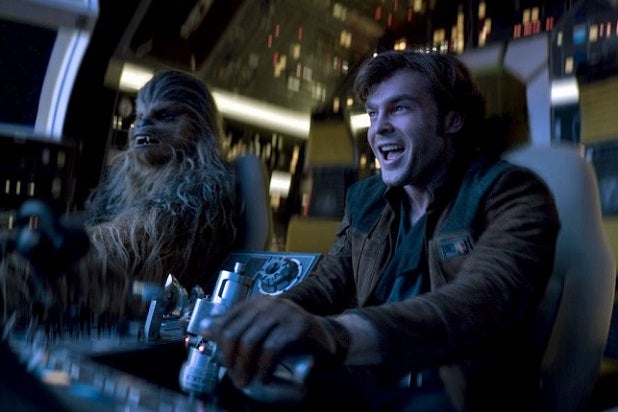 Most fans still have to wait another two weeks to see “Solo: A Star Wars Story,” but those lucky enough to attend the Hollywood premiere Thursday night are sharing their thoughts. The verdict: “Solo” is a great intergalactic heist movie, and star Alden Ehrenreich is fully capable of filling Harrison Ford’s Han Solo boots.

The prequel to 1977’s “Star Wars: A New Hope” delves into the early life of everybody’s favorite scoundrel, Han Solo (played originally by Ford and here by Ehrenreich). We all know Han as the best smuggler around, working for Jabba the Hutt on Tatooine with his best bud, walking carpet wookiee warrior Chewbacca, and flying the fastest hunk of junk in the galaxy, the Millennium Falcon.

Before he was all that — as well as a general fighting or the Rebellion, Luke Skywalker’s best friend and Leia Organa’s paramour — Han was a nobody. “Solo” finds him gaining his best friend and his ship, filling in a piece of “Star Wars” history that’s been alluded to but never seen: Han winning the Millennium Falcon from Lando.

“Solo” hasn’t had the easiest time making it to the screen, though. Lucasfilm originally hired “The LEGO Movie” directors Phil Lord and Christopher Miller to helm the movie, signaling that it’s more of a comedy than previous “Star Wars” movies have been. Lucasfilm fired the two directors, however, reportedly after their creative vision clashed with that of screenwriter Lawrence Kasdan and his son and co-writer, Jason Kasdan.

Ron Howard picked up the baton for “Solo,” finishing the movie and reshooting much of it — reportedly, as much as 70 percent of the movie is now made up of reshoots, giving “Solo” a different feel from the original cut. But folks at the premiere found it to be emotional, exciting and the most action-packed of any “Star Wars” movie.

Read the reactions below.

#SoloAStarWarsStory: It takes a bit for it to find its feet and for AE to turn on enough charm to make you forget he’s not HF. But once it kicks into its hey-let’s-make-a-crew and yes-also-do-a-heist stuff, it totally flies.

I figured if @DisneyStudios was willing to show 'Solo: A Star Wars Story' a few weeks before release it must be good and it absolutely is. Film is a blast and a welcome addition to the Star Wars universe. @RealRonHoward you did a great job. Congrats. pic.twitter.com/1pkWH2y6qE

After seeing #SoloAStarWarsStory I can confirm one thing: bank on Lando: A Star Wars Story getting a green light by the end of the year. Donald Glover continues to be perfect. pic.twitter.com/ipjq0rcEtX

Solo: A Star Wars Story is a goddamn delight. It’s a non-stop adventure packed with way more emotion than your expecting. You’ll have a smile on your face the whole time and leave eager for more. pic.twitter.com/fOsF7Tr95L

#Solo is a ton of fun! Alden Ehrenreich is full of charm and definitely does right by Harrison Ford. Not to mention Donald Glover, who's equally great as Lando.

Don't let the drama and rumors fool you, this is a seriously fun, exciting addition to the Star Wars universe!

#SoloAStarWarsStory is reaaaaalllly good. Fun as hell. It’s a straight intergalactic heist movie, kind of refreshing to see a Star Wars movie w/o a Death Star or the rebellion’s fate at stake. Alden Ehrenreich is super impressive as Han, but L3 might be my favorite new character.

There are things you simply won’t believe until you see and hear them, and even then… wow… #hansolo

Solo: A Star Wars Story has a light tone and has some great action sequences. There were great moments but some were a bit too on the nose for me. The Chewie/Han bromance is the thing to watch for.

WOW! #SoloAStarWarsStory! I felt like I was watching a @StarWars movie again. So many great moments for the fans AND surprises.. I’ve got the feels after this one…MORE than #InfinityWar.

Alden Ehrenreich is the real deal, Thandie Newton is who I want to be when I grow up, and Phoebe Waller-Bridge’s L3… well we’ll talk about that later. ???? #SoloAStarWarsStory

Solo: A Star Wars Story is more of what I loved about Rogue One. Most real looking film in the franchise, and the best blaster actions scenes and vehicle chases. #SoloAStarWarsStory

This is the grungiest, most grunt-level blue collar #StarWars ever and I am here for it. #Solo

It does take a bit to get used to Alden as Han, but after 30 minutes or so your brain adjusts. (Also I've now finally seen Clint Howard in a Star Wars movie.) #soloastarwarsstory

#Solo was a blast. The Kasdans nail the character of Han Solo. Yes, the story is a series of expected events (Han meets chewie….etc) but none of them happen as expected. Stay away from spoilers, big Marvel-level shit that will make you wonder where Lucasfilm is headed next.

#SoloAStarWarsStory was a mostly fun adventure and solid performances but with a predictable story. Never will be one of my favorite #StarWars movies but I enjoyed enough of it.

I loved #SoloAStarWarsStory so much. It’s a western. A caper. Funny with so much heart. It’s got so much surprises that fans are going to love. Donald Glover is charming x1000. Alden Ehrenreich is a great #HanSolo and just know I’ve been saying this for years! Fave new #StarWars.

So, I was REALLY worried about #SoloAStarWarsStory but those concerns are totally laid to rest. A movie for fans AND those totally fresh to the Star Wars franchise. Heart, humor and a Falcon full of top notch action. From a worry to a favorite. Very, very happy! pic.twitter.com/VhvBSDFvjE

#SoloAStarWarsStory has a bit of a rough start, but it was a blast of of an adventure. And yes, Donald Glover steals the movie! But you already knew that. pic.twitter.com/4SGiq6tDmQ