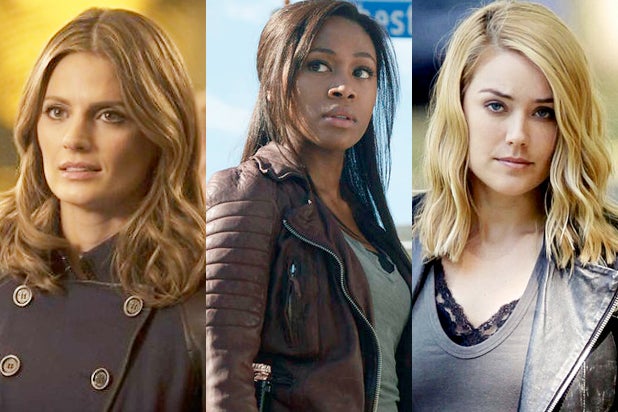 Some key women have gone missing on TV lately. But is this a sign of sexism — or just the way episodic drama works as the season winds down?

At least three female leads on major network dramas were killed off or announced as exiting their respective shows in recent weeks. But despite the appearance of a trend, and a social media backlash, experts say it may just be par for the course when it comes time for shows to wrap up their seasons.

“Sleepy Hollow” killed off its first-billed actor, Nicole Beharie, in its Season 3 finale, and “The Blacklist” followed a week later by killing off Megan Boone’s Liz Keen. “Castle” completed the trifecta by announcing its leading lady, Stana Katic, will not return if the show gets renewed.

The response from social media was swift — and the fact that all the characters and actors affected are female did not go unnoticed.

“Remember, TV ladies, even if the ENTIRE show was built on your relationship with the male co-lead, you’re still completely expendable!” said one irate Twitter user, whose tweet has been retweeted over 300 times.

However, to some experts, three such similar storylines may not be enough to draw any larger conclusions about industry-wide trends.

“I think it’s just weird timing,” said Tom Nunan, a lecturer at the UCLA School of Theater, Film and Television and founder of production company Bullseye Entertainment. “Particularly when you look at how many channels there are now, how much original content is being pumped out into the stratosphere, on a relative basis, it’s almost microscopic.”

“It is hard to say there’s a significant pattern with this small sample,” said USC Professor of Writing and Gender Studies Diane York Blaine. “Women have certainly gained much more prominence as leads in action TV shows, starting around ‘Buffy,’ so I doubt that’s going to go away.”

“Castle” and “Sleepy Hollow” have not yet been renewed for new seasons. And as it turns out, sometimes whacking a major character can have a major impact.

Nina Dobrev‘s last season of “The Vampire Diaries” averaged a 0.72 rating for The CW and was one of the youth-skewing network’s most popular shows. Season 7, the show’s first without its leading lady, has been averaging just 0.49, a drastic drop over the course of one season.

“I honestly believe in each of these specific franchises, ‘Sleepy Hollow,’ ‘The Blacklist’ and ‘Castle,’ the franchises themselves are more durable and stronger than any of the cast members, with the exception of the name cast member in ‘Castle’ [played by Nathan Fillion]. If he were to go, then I think there’s no show,” said Nunan. “But otherwise, I don’t think it’s a signal that men are more important than women on these shows. It’s just weird coincidence and timing.”

And of course, there are also success stories of shows continuing to thrive even after a crucial member of the cast leaves. Most notably, “Law & Order: SVU” seemed like a lost cause after Christopher Meloni left the show, but the NBC procedural has continued to thrive with Mariska Hargitay. “The Good Wife” similarly lost its leading man, Josh Charles, as did “Homeland” with Damian Lewis, and went on to several more seasons.

The CW has also just renewed “Reign,” even though this season saw the death of its leading man Toby Regbo, who played King Francis, husband to Adelaide Kane‘s Mary, Queen of Scots.

“Chris Meloni left, Danny Pino’s gone, but I don’t know if there’s a show there [in ‘SVU’] without Mariska,” said Nunan. “Once Julianna Margulies said it’s over, ‘The Good Wife’ was over, that was it. So there are actresses that are of consequence that without them there is no show. I just don’t think that’s the case with the three shows here.”

It could also be par for the course that more high-profile female characters (and their actresses) will be put through shocking scenarios, as women become more and more prominent in the television space.

The three incidents will also likely not have much of an impact on how these sorts of storylines go down in the future, since all three shows are produced by different studios and air on different networks.

“Most networks and studios are focused on those specific projects at those specific moments in time,” said Nunan. “If that studio or network was running rampant over a sequence of programs within the universe they control, it would be a problem. But if you look at it, these are three completely different networks with completely different studios serving them. Frankly, it’s just standard operating procedure this time of year when cast gets changed out and studios and networks have to look closely at, what can they do to these shows to make sure they can survive into the next season?”

ABC, Fox and NBC declined to comment for this story.