President Donald Trump and his family met with Pope Francis at The Vatican on Wednesday, and Twitter is having a field day. People are comparing photos from POTUS’ recent meeting with photos of the pope with other world leaders. Can you spot the one in which the pontiff isn’t smiling?

Pope Francis with different heads of state during their visits at the Vatican.

As Pope Francis poses with Barack Obama, German Chancellor Angela Merkel, and Mexican President Enrique Peña Nieto, respectively, he smiles. Whereas with Trump, he does not, Twitter user Cassie Dagostino observed (above).

Images of the smile-versus-scowl comparison have caught fire on social media. But, as CNN points out, the newest picture of the pope in the set doesn’t tell the whole story. CNN’s Chris Cillizza said, “The Vatican put out a nice statement after their meeting saying the two leaders talked about ‘the promotion of peace in the world through political negotiation and [inter-religious] dialogue.” Cillizza accompanied his post with another photo of Trump and Pope Francis; this time, the pope looks plenty happy as he smiles pleasantly at Trump.

Accuracy aside, if you want to keep snickering over the meme, here’s more fodder for you:

Look at the Pope's face when he looks at Trump. pic.twitter.com/0wvBVesUdP

imagine how bad of a person you must be for the pope to hate you pic.twitter.com/qKcuSzWoJ6 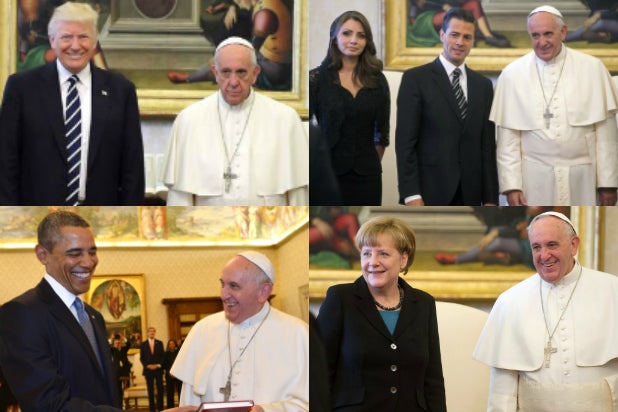