The Auschwitz-Birkenau-set “Son of Saul” opens at the start of a work shift, when a few men with red X’s painted on the backs of their coats herd a large group of new arrivals indoors, reassuring them that they’ll soon be fed and given job assignments. The camp’s newcomers are told to strip and pick up their clothes and belongings after their group shower — from which, of course, they’ll never emerge.

The marked men wait on the other side of the shower door for the screams to stop so they can resume their work as the Sonderkommando, Jews tasked with the grunt labor of carrying out Hitler’s Final Solution.

That five-minute preamble is a harrowing and brilliant sequence, encapsulating the Nazis’ brutally efficient approach to genocide. Cinematically, though, it’s most notable for director László Nemes’s extreme close-up throughout of Sonderkommando Saul (Géza Röhrig), whose face is a mask of silent detachment.

Only once does it gnarl in annoyance during those first minutes, when another man jostles against him. Saul isn’t so benumbed that he’s beyond flashes of irritation, and the physicality of the shove forces him to consider his immediate surroundings — a living nightmare that’s still preferable to the death that he knows awaits him in just a few weeks or months, when the camp overseers will deem him no longer useful.

Saul becomes fixated on a boy who briefly survives the showers, and his mission to give the dead child a religious burial makes up the plot of this tense, harsh, and superlative Hungarian drama.

Written by Nemes and Clara Royer, the compellingly ambiguous script intentionally never makes clear why Saul is so determined to inter the boy at the risk of his own life and those around him: He might be crazy or a holy fool or recklessly defiant or exercising the only scrap of control over his life — or all four. (His claim that the boy is his son is not impossible, but not entirely credible, either.)

The rest of th 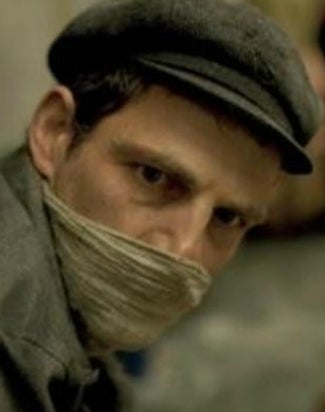 e film is also shot in close-up of Saul’s mien, and the camera’s blurred background scenes — where the Sonderkommando witness more massacres, clear the shower of corpses, and shovel knolls of ash into the river — reflect the character’s mental retreat from his environs while simultaneously immersing us further in them. It’s an inventive and acutely effective experiment in compositional expressionism — and as notable as the occasional slight upturn in Saul’s lips that betray his possibly delusional sense of purpose.

Deft sketches of Sonderkommando life — the gruff fear that blights every interaction, the knowledge that any of them can be killed at any time, the linguistic obstacles among even multilingual Europeans that hamper communication — add to the constant friction and dread and hopeful suspense that follow Saul’s undertaking.

But he isn’t the camp’s only subversive. Gradually, a subplot among the other Sonderkommando to destroy Auschwitz from the inside surfaces, leading to a taut and forceful finale that feels inevitable. It’s the ending that’s right, even if it’s not the one we want. It’s that devotion to truth that makes “Son of Saul” such a difficult watch — and also one of year’s most important masterpieces.