Family films are back at the box office as Paramount’s “Sonic the Hedgehog 2” earned an excellent $71 million opening this weekend from 4,232 theaters, topping the $58 million launch of the first “Sonic” film in 2020 and setting opening records for video game adaptations and for lead star Jim Carrey.

At a time when theaters have been looking for movies that can bring families back into the seats, “Sonic 2” delivered with parents and kids making up 58% of the opening weekend crowd — up from 49% for the first “Sonic” — with 67% under the age of 25. This can be attributed both to strong pre-release buzz and the sequel’s release during the spring break period for schools instead of February for the first film.

“Sonic 2” has posted one of the Top 10 highest opening weekends for any film since theaters reopened, sitting in a virtual tie for sixth with Chloe Zhao’s Marvel film “Eternals.” It should also soon pass the $160 million domestic run of “A Quiet Place — Part II” to become Paramount’s highest grossing film of the COVID era. If it legs out past $200 million, it will join “Mission: Impossible — Fallout” as only the second Paramount release to cross that mark since 2015. 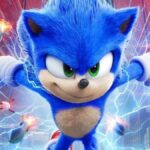 And all signs point to “Sonic 2” having a great run in theaters during and after Easter break. Audience reception is strong across the board, including an A on CinemaScore, a 97% Rotten Tomatoes audience score, and a 74% recommend rating on Comscore/Screen Engine’s PostTrak. The sole hurdle for the film will be the release of Universal/DreamWorks’ “The Bad Guys” on April 22, though movie theaters will welcome having two family films to screen after having none through the first quarter of the year.

That first quarter was a great one for Paramount, which found low-budget success with revivals of “Scream” and “Jackass” to start off the year before finding some modest mid-budget success with “The Lost City,” which added $9.1 million in its third weekend to bring its domestic total to $69 million. Now the studio’s big bet on the Blue Blur is paying off, with a third “Sonic” film and a Paramount+ spinoff starring Idris Elba as Knuckles the Echidna having already been greenlit back in February.

On the flip side, Universal’s “Ambulance” is failing to get its engine going with an opening weekend of just $8.7 million, below pre-release projections of $10 million and standing at No. 4 on the charts. It is the lowest domestic opening ever for a film directed by Michael Bay, below the $12.4 million earned by “The Island” in 2005. 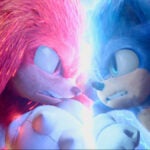 Millennials age 25-34 were the largest demographic at 28% for this action thriller, though the split of audiences over and under age 35 was an even 50/50. The silver lining for “Ambulance” is that word-of-mouth is generally good with an A- on CinemaScore and 87% Rotten Tomatoes audience score, albeit with a much lower PostTrak recommend rating at 61%.

With a $40 million production budget, the break-even point for “Ambulance” is also considerably lower than many of Michael Bay’s past films. But unless that word of mouth leads to some very strong holds, “Ambulance” will need overseas support to reach that break-even point, having earned $22.4 million internationally for a $31.1 million global start.

Also Read:
How ‘Everything Everywhere All at Once’ Pulled Off Marvel-Worthy VFX With a Team of 5 People (Yes, Seriously)

Among holdovers, Sony’s “Morbius” has seen a dramatic 74% drop from its $39 million opening weekend, earning $10.2 million in its second weekend for a total of $57 million after 10 days in theaters. The Marvel film’s poor word-of-mouth, combined with this weekend’s newcomers peeling off 18-35 audiences are likely the key factors in the drop. Meanwhile, Warner Bros.’ “The Batman” has stayed in the top 5 for one more weekend with $6.5 million grossed and a total of $359 million domestic after six weekends.

Just below “The Batman” in sixth is A24’s sci-fi film “Everything Everywhere All at Once,” which continues to ride the wave of its overwhelming critical and audience acclaim as it rolls out nationwide. Expanding to 1,250 theaters this weekend, the film starring Michelle Yeoh and Ke Huy Quan added $6 million for a total of $8.4 million.