Does Sony think Beyoncé is pirating her own music on YouTube?
Judging by the unprecedented action that Sony Music took, you’d think so.
On Friday, her own record label blocked videos on the superstar singer’s YouTube channel, citing copyright infringement. 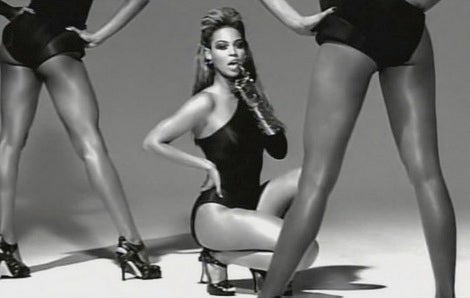 Like many acts from Gorillaz to The Rolling Stones, Beyonce has had her own page up on the popular video-sharing site. And she still does — but fans who log on to Beyoncé’s site to watch videos — like the award-winning “Single Ladies (Put a Ring On It),” are now greeted by a message that reads “This video contains content from Sony Music Entertainment, who has blocked it in your country on copyright grounds.”
Ironically, the stern notice from Sony on Beyoncé’s YouTube page sits right beneath a banner — presumably from the record company — that says “Congratulations for winning six Grammy Awards.”
Footage of Beyoncé’s commercial for fashion house Dereon can still be watched on her YouTube site.
Fans can still find the blocked Beyoncé videos on the YouTube page of VEVO, the website co-owned by Sony and Universal Music. It’s a mixed bag on Beyoncé’s official site, where the clip for her song “Video Phone” can still be watched, but only a live version of “Sweet Dreams” is available and “Single Ladies (Put a Ring On It),” which won Song of the Year at the Grammy’s and MTV’s best music video of 2009 is nowhere to be found.
A number of artists (such as Prince) are strict in seeking out use of videos and other material that are used without their permission. However, while there has been some friction in recent years between the Google-owned YouTube and record labels over licensing and videos on the site, Sony’s move is the first time a record company has shut down one of its own superstars.
The blocking of Beyoncé’s site comes the same week that the controversial Anti-Counterfeiting Trade Agreement leaked onto the web. The far-reaching agreement, which countries such as the US, the European Union, Japan, Canada, South Korea and Australia have been negotiating in near secrecy since early 2008, would, if adopted internationally, allow law enforcement to close down sites and email accounts of those the entertainment industry deems sharing illegally obtained copyright material.
The agreement would also hold Internet providers responsible for consumers’ illegal downloading and file sharing – which could result in millions in fines.
Beyoncé, who makes no reference to Sony’s blocking of her YouTube site on her official website, recently made pop history when she and Lady Gaga’s “Telephone duet hit No. 1 on the Billboard Pop charts earlier this month. Gaga and Beyoncé now tie Mariah Carey with six number ones.
Attempts by TheWrap to reach Sony representatives went unanswered.
x
Looks like you're enjoying reading