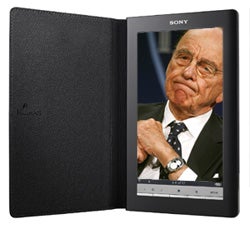 In addition to electronic additions of the Journal and Post, Sony will also offer its e-reader users news summaries by Marketwatch.com – another Dow Jones-owned property.

Subscriptions to the Journal e-edition will cost $14.99 per month; $10.99/month for MarketWatch and $9.99 for the New York Post — which Sony will have exclusive rights to distribute. (The Journal is making its "second edition" exclusive for Sony.)

Sony hopes that exclusive content deals like these can help it compete with its archenemy in the e-reader market: Amazon’s Kindle.

Last month, Sony chief executive Howard Stringer, who announced the e-reader pact with News Corp. in New York on Thursday, outlined a turnaround plan for investors that focused on pushing the technology offered by its digital devices.

The deal also underscores Rupert Murdoch’s plan to get users to pay for News Corp. content on all platforms.

"The sense of losing control of our content is on all of our minds,” Stringer said. “We’re trying to preserve the value of content in both movies and music and newspapers.”